History will always have its in-between technologies — that stuff that tides us over while the Next Big and Lasting Thing is getting the kinks worked out of it. These kinds of devices often do one thing and do it pretty well. Remember zip drives? Yeah you do. Still have mine.

The halcyon days of the AlphaSmart NEO sit in between the time where people were chained to heavy typewriters and word processors and the dawn of on-the-go computing. Early laptops couldn’t be trusted not to die suddenly, but the NEO will run for 700 hours on three AAs. 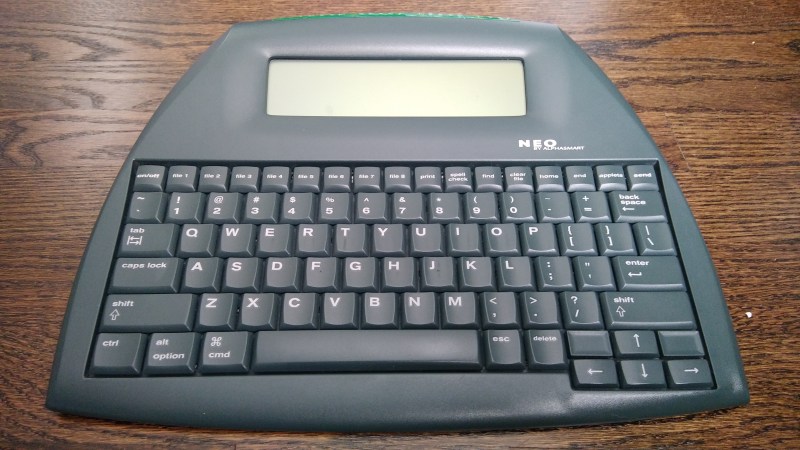 The NEO stands for the freedom to get your thoughts down wherever, whenever, without the need for a desk, paper, ink, ribbons, power cords, and the other trappings that chain people indoors to flat surfaces. And that’s exactly what was so tantalizing to me about it. Inspiration can truly strike anywhere at any time, so why not be prepared? This thing goes from off to blinking cursor in about a second and a half. There’s even a two-button ‘on’ option so you don’t run the battery down or accidentally erase files while it’s in your bag.

I bought this funny little word processor a few years ago when I wanted to attempt NaNoWriMo — that’s National Novel Writing Month, where you write 50,000 words towards a novel, non-fiction book, or short story collection in any genre you want. It averages out to 1,667 words a day for 30 days. Some days it was easy, some days it was not. But every non-Hackaday word I typed that month was on this, my Mean Green Words Machine.

Takes three AAs. Has much better battery life on regular alkaline than rechargeables.

Word count is just a few keypresses away.

The AlphaSmart NEO word processor was originally sold to writers in the early 2000s who were tearing out their hair from the distractions of dying laptop batteries and the early Internet. They were also marketed to schools and given to kids as typing trainers for around ten years, which is why there are so many of them on the secondhand market. I will say that the NEO certainly hits a sweet spot of utility without being so versatile and useful as to be a distraction.

These can still be had for about $40 shipped on the electronic bay. That is quite the stunning departure from the $219 USD price tag of 2008 when this ad was gracing the back covers of all the writing magazines.

Although I think of the NEO primarily as a word processor, that’s not the only thing it does. The writing function is one of a few so-called applets. There’s also a calculator that keeps a running history, a typing trainer and a quiz applet that lets teachers upload tests from a computer. There’s also a beamer program for sending files back to the teacher over IR.

Two Good Things in One

My NEO definitely served its purpose during NaNoWriMo, and that’s because of a number of things. At 1.5 lbs (709 g), it’s not heavy enough to weigh down your lap if the 1,667 words are taking a long time to come out. The full keyboard is pretty much perfect — there’s no pounding necessary to actuate the keys, which means better flow and more words total. Honestly, the keyboard action is fantastic. It’s just scissor switches under there, but they’re wonderful. Here, take a listen:

NEO can show up to six lines of text at a time, so the words disappear as you go, but you can still see far enough back that you won’t get lost. You can easily check your word count or the remaining battery percentage with different two- and three-key combinations that are listed in the quick guide on the back. Each day when I was finished writing, I backed up my work by streaming the words to my PC serially, one character at a time. That’s not the only way to send files. They can also be sent en masse with the AlphaSmart manager software, or for classroom purposes, can be individually beamed over IR to a special receiver.

I can’t use it for too long at a time anymore because of the whole RSI thing, but I used to carry this around in the car with me because it’s so rugged. If you were at Supercon in 2019, you may have seen me using it in conjunction with my laptop. That’s one of my favorite features — that it can be used as a plug-n-play keyboard.

After the NEO2, AlphaSmart came up with the Dana, which is like a grander, Palm-powered version of the NEO that also runs PalmOS applications. The screen is bigger than everything before it, there’s a battery-gulping backlight, and a touchscreen meant to be used with a stylus.

The Dana also has dual SD card support, but they have to be SD 1.0 technology, be 1Mb or smaller, and FAT12 formatted. I would love to use my Dana more often, but am too afraid of battery drain, with or without the backlight on. Also, I don’t trust the SD card situation. Might as well send files over USB. 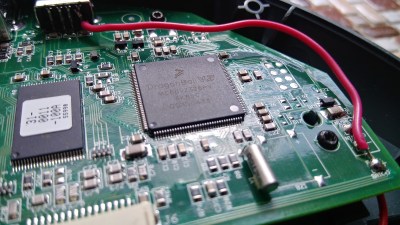 One of the few things that bothers me about the NEO is the lack of a backlight. I tried to add a backlight panel to it, but there just isn’t enough room for it. I still might try to edge-light it, but for now, I just did a simple hack to power an external light.

All I did was run a wire from the battery case over to the female USB-A port meant to connect to a printer. I got a cheap USB reading light from the dollar store with a bendy neck, and added a resistor to make it dimmer. When I need more light, I just plug it in.

I got this idea from [newsINcinci] on reddit who made their NEO into a Bluetooth keyboard by doing the port-powering mod, and then plugging in a Bluetooth adapter with a USB bridge.

NEO doesn’t have a whole lot going on under the hood. The brain is a 33MHz DragonballVZ, which is a 68000-based processor made by Freescale/Motorola. The VZ saves every keystroke to RAM, which is unnoticeable in operation but makes it quite important to keep a fresh coin cell on board.

I would still like to add edge lighting someday, but I would have to cut into the metal bezel around the display to get to the edge in the first place.

NEO is a great distraction-free writing tool and all-around external keyboard. I would think the 68k-based processor should make it ripe for hacking, but that stuff is out of my wheelhouse. If I could, I would add microSD support, but I don’t really mind getting the files over USB. Wiring up an internal Bluetooth transmitter could be fun.

I kind of wish these were still used in schools instead of full-blown laptops. I learned to type on a IBM Selectric typewriter in the early 1990s and often wished I could have practiced on something at home. I suppose that’s not really a problem these days, but distraction-free typing hardware is getting harder to nail down.

48 thoughts on “AlphaSmart Neo Teardown: This Is The Way To Write Without Distractions”