While I was waiting for the keyboard to arrive, I emailed my contact at Marsback to ask why they decided to go this route. They believe that the switches are the most important part of any mechanical keyboard (I wholeheartedly agree), and sought to control the keystrokes and the sound of the bounce. Fair enough.

I had also noticed that the switches are “double-lubricated”. I wondered if this meant that they did it in two places, or used grease and liquid, or what, and I was told that they lubricate the slider and both ends of the spring where it contacts the underside of the slider and the base of the switch.

First Impressions — This Is a Solid Keeb

When I first opened the box, the keeb started to glow like the briefcase in Pulp Fiction because the battery still had a charge. That’s a neat trick. I soon realized that there is no switch anywhere, so I guess it’s just on all the time. In fact, the only interruption in the translucent opaline polycarbonate body is the USB-C port. According to Marsback, each base is milled from a solid block of polycarbonate. Indeed, this keyboard looks like it’s carved from a big block of ice and belongs in the Fortress of Solitude. There aren’t even any case screws showing — all six of those are hidden beneath the key caps.

Let’s Talk About Those Key Caps

Speaking of the key caps, I don’t like them much as much as I hoped I would. I wanted the white ones, but convinced myself that they would just get dirty, so I opted for the dark-themed version instead. I later realized that the dark version has double-shot ABS key caps, and the white and sakura pink versions have PBT key caps. This could be just because I’ve got a prototype, and the real-deal dark theme caps will be PBT, but I don’t know.

I am not anti-ABS in general, but these particular keycaps just feel chalky to me. And the worst part is, they’re already starting to shine just a little bit. If I were going to use this keyboard with any regularity (and I honestly might, because it’s a good rectangle) I would probably just get new keycaps. They’re easy enough to swap out, and I don’t think I would have trouble finding a set that would fit, because there’s nothing super weird about the layout. 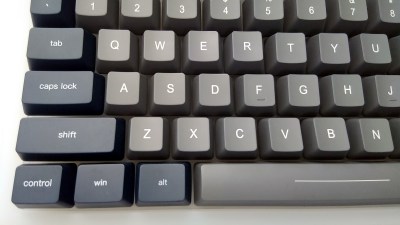 I offered money to Marsback for a set of the white pudding ‘caps, and they have kindly agreed to send me some. I’m totally pumped to get them because now that I’ve used this keyboard and seen the video, I’ve decided that the white puddings are the ideal choice to round out this little rainbow ice block.

I have just one more complaint about the keycaps, and that is the font on the alpha keys: it’s just kind of meh looking. I dig the font on everything else, but these majuscules feel uninspired to me. There are no other capital letters on the board to compare them to, but it really feels like there are two different fonts going on here, and they don’t quite visually agree. 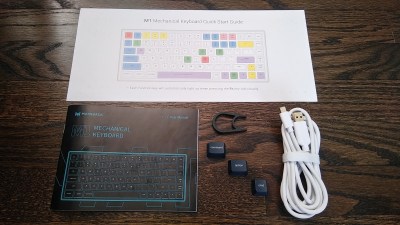 Getting the Lay of the Land

The layout itself is pretty good. I can honestly say that the 84 keys are sufficient, and there isn’t anything I miss. Control is where it should be in the lower left corner. I like the colorway, though I might have made Delete red as well. I still haven’t decided if I like the line on the space bar. I like that the top two rows are ortholinear, and the fact that Page Up and Page Down are profiled a little differently to help distinguish them from the alphas and arrows.

As someone who is now used to hitting Backspace with their left thumb, the Backspace of this keyboard is right where it oughta be, meaning that as I test out this rectangle, my ancient muscle memory has been hitting the key just fine without looking. Only a few times have I hit the Home key by mistake, during one of those zealous repeated Backspacings where you just keep messing up the word and and wildly pound the keyboard in disbelief.

This thing feels quite sturdy, which is always a plus. Between the weight and the rubber feet on the bottom, it’s not going to move around on the desk, but it’s not so heavy that you wouldn’t pack it up and take it with you if you decided to get some work done at the coffeehouse. The angle can’t be adjusted, but the default angle feels good to me. One really good thing I’ve noticed is that inspires good typing posture. I find myself floating my hands above it, which is kind of unusual for me — maybe I’m just too used to resting my palms on the Kinesis pads.

So, how does it keeb? I must say that I really like this keyboard in spite of the key caps and the linear switches, and those are big obstacles to overcome. These are probably the greatest linear switches I’ve ever clacked on, which is saying a whole lot, because I really don’t like linear switches at all (but I know that plenty of gamers love them). I would be willing to bet that the nice thocky typing experience is due to the thick polycarbonate case and switch plate. The overall typing experience is really nice despite the lack of tactility in the switches. And although I’m used to a split keyboard, I don’t feel like this one is cramped.

Even though I try not to do it, I usually bottom out when I type, so this keyboard is especially noisy under my fingers. And it sounds fantastic! The backspace sounds different from every other switch, especially the space bar. To me, the backspace sounds like a woodpecker. Maybe it’s because of the stabilizer or the thickness of the wire. Have a listen:

I find it interesting that Marsback went to the trouble of making their own switches, but didn’t brand them and instead left them blank. The switches I took apart definitely felt as though their springs were lubed, but not overly so. It doesn’t feel heavy at all, so I think they must have used spray or liquid lube instead of grease.

One thing I did notice was the amount of plastic flashing left on some of the sliders. While it’s not a huge deal, if there’s a big enough flap of flash left on a slider’s shoulder, you might be able to feel it. Or a bit of flash on the stem might affect how your keycap fits or sits. But I think it’s likely that Marsback used factory second key switches for their media samples and will be more selective about the switches that make it into the hands of Kickstarter backers. 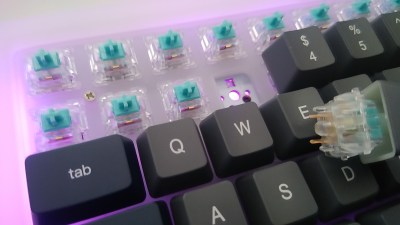 I felt a little weird tearing this keyboard down while it glowed happily at me. But it’s impossible to turn it off, and that huge battery is nowhere near dead, so I just turned off Bluetooth on my PC and enjoyed watching the pretty colors until it feel asleep.

This keyboard is really easy to take apart, which will make it easy to give it a nice, deep cleaning once in a while. All you have to do to see the other side of the board is pull the keycaps and untwist the six tiny Phillips-head screws. The switches are hot-swappable and sit in Kailh sockets, and you can leave those in place. There’s no need to take out the stabilizers — they will move with the PCB, which is screwed to the switch plate — another thick chunk of milky-white polycarbonate.

There are three chips on this board — the STM32 controller, the Nordic 52810 Bluetooth chip, and a third chip that I believe is a MOSFET driver for the LEDs. The STM32F411 is the same chip as the black pill microcontroller.

Overall, I think this is a good keyboard, particularly because of the stay-put slab of a case. Normally I would shy away from spending so much on a keeb unless there’s a tactile or clicky switch option, but I was pleasantly surprised to find the best linear switches I’ve ever clacked on, and I credit the case for the solid, thocky feel that is reminiscent of really old keyboards. Even so, it’s quite nice that the switches are hot-swappable. That is one direction in which more manufacturers should head.

That said, now that I’ve played with one, I would gladly fork over $150 or so for everything but the switches and maybe the key caps. I’d like to see Marsback sell these as kits, especially since they are manufacturing not one but three types of linear switches with different required actuating forces. My prototype has the lightest type, MBS-I.

I do wish the LEDs around the perimeter were more densely packed. It’s not that the keeb needs to glow any brighter, but you can count the individual LEDs as it is now.

I wouldn’t worry about whether Marsback will deliver on the Kickstarter. The keyboard is already in early production, and this is not their first successful launch — that would be the Zephyr mouse with the fan. If you need more portable RGB in your life, this may very well be the party keeb for you.

39 thoughts on “Inputs Of Interest: Marsback M1 Is A Portable Party Peripheral”