The January 16th “Green Run” test of NASA’s Space Launch System (SLS) was intended to be the final milestone before the super heavy-lift booster would be moved to Cape Canaveral ahead of its inaugural Artemis I mission in November 2021. The full duration static fire test was designed to simulate a typical launch, with the rocket’s main engines burning for approximately eight minutes at maximum power. But despite a thunderous start start, the vehicle’s onboard systems triggered an automatic abort after just 67 seconds; making it the latest in a long line of disappointments surrounding the controversial booster.

When it was proposed in 2011, the SLS seemed so simple. Rather than spending the time and money required to develop a completely new rocket, the super heavy-lift booster would be based on lightly modified versions of Space Shuttle components. All engineers had to do was attach four of the Orbiter’s RS-25 engines to the bottom of an enlarged External Tank and strap on a pair of similarly elongated Solid Rocket Boosters. In place of the complex winged Orbiter, crew and cargo would ride atop the rocket using an upper stage and capsule not unlike what was used in the Apollo program.

There’s very little that could be called “easy” when it comes to spaceflight, but the SLS was certainly designed to take the path of least resistance. By using flight-proven components assembled in existing production facilities, NASA estimated that the first SLS could be ready for a test flight in 2016.

If everything went according to schedule, the agency expected it would be ready to send astronauts beyond low Earth orbit by the early 2020s. Just in time to meet the aspirational goals laid out by President Obama in a 2010 speech at Kennedy Space Center, including the crewed exploitation of a nearby asteroid by 2025 and a potential mission to Mars in the 2030s.

But of course, none of that ever happened. By the time SLS was expected to make its first flight in 2016, with nearly $10 billion already spent on the program, only a few structural test articles had actually been assembled. Each year NASA pushed back the date for the booster’s first shakedown flight, as the project sailed past deadlines in 2017, 2018, 2019, and 2020. After the recent engine test ended before engineers were able to collect the data necessary to ensure the vehicle could safely perform a full-duration burn, outgoing NASA Administrator Jim Bridenstine said it was too early to tell if the booster would still fly this year.

What went wrong? As commercial entities like SpaceX and Blue Origin move in leaps and bounds, NASA seems stuck in the past. How did such a comparatively simple project get so far behind schedule and over budget?

The Rocket to Nowhere

Arguably, the most pressing problem with the SLS program is that it has no clear purpose. As a congressionally mandated project, NASA must continue on with its development regardless of whether or not they actually have a use for it. Critics have often referred to the program as the “Senate Launch System”, as they believe the Shuttle-derived concept was conceived primarily as a way to make sure the manufacturing facilities used to build the engines, propellant tanks, and solid rocket boosters for the Space Shuttle would remain in operation even after the program was retired.

Without a clear mission for the SLS, it’s been difficult for NASA engineers to make any long-term development plans. What payload does the booster need to carry, and to where, are key questions that need to be answered. NASA is no longer pursuing the mission to recover a near Earth asteroid, and a human mission to Mars is still decades away. The SLS is scheduled to launch the Europa Clipper to Jupiter in 2025, though the Falcon Heavy is already being considered as a backup should it not be ready in time.

While its ultimate effectiveness is debatable, the design of the Space Shuttle was driven by a very specific goal: to transport large objects to and from low Earth orbit inside of its cargo bay. Every decision made during the program’s lifetime revolved around that core tenet. Without similar guidance, the Space Launch System has found itself adrift.

Put simply, the single defining characteristic of the SLS is the sheer mass it’s capable of putting into space. The rocket’s base Block I configuration is designed to put 95,000 kg (209,000 lb) into low Earth orbit, and the later Block II version 130,000 kg (290,000 lb). But while these are impressive figures, it’s not immediately clear what type of mission architecture would require such massive modules to be launched in a single-shot. The 50 years of experience gained since the Apollo era has taught us that modular systems, launched on competitively priced boosters and assembled in orbit, is the key to creating a sustainable space infrastructure.

From the beginning, the Space Shuttle was designed to be an almost completely reusable architecture. Aside from the External Tank, every component of the system could be recovered, refurbished, and flown again. The idea being that it would be cheaper and faster to reuse the same vehicle than it would be to build a new one for each mission.

Unfortunately the complexity and cost of the refurbishment process was greatly underestimated, due in part to technical and material limitations of the era. In the end, the Shuttle never launched as affordably and as rapidly as its designers had hoped, but the lessons learned during the program helped shape modern reusable spacecraft such as Sierra Nevada Corporation’s Dream Chaser and the Boeing X-37B.

But despite the current trend towards reusable rockets and spacecraft, NASA is taking a step backwards with the SLS by using components which were designed for refurbishment and discarding them the end of each flight. The RS-25 engines installed on the first SLS rocket are not newly manufactured, they are literally the same engines that were pulled from the Shuttle Orbiters when they were put into museums. The same is true with the Solid Rocket Boosters (SRBs); the new elongated boosters are using segments from the Shuttle’s original SRBs, but instead of coming down on parachutes to be recovered, they will smash into the ocean and sink. 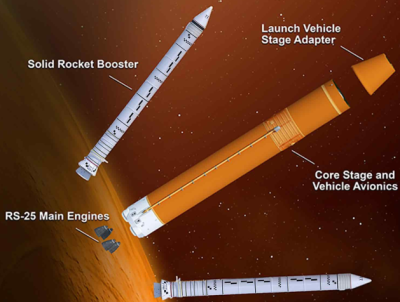 Each flight of the SLS will destroy four Shuttle-era RS-25 engines and two SRBs, simply because they were taking up space in a NASA warehouse. From a historical standpoint, this is abhorrent. But more practically speaking, integrating these decades-old components into a modern launcher has proven to be far more difficult than anticipated. While they’ve seen some upgrades since the retirement of the Shuttle, it’s no exaggeration to say that some of the people working on the SLS today were not born when its engines were built.

As of right now, NASA only has enough RS-25 engines leftover from the Shuttle program to support four SLS flights. To address this, the agency has already contracted Aerojet Rocketdyne to produce a new version of the engine called the RS-25E that’s designed to be expendable. Unfortunately, these design changes come at a steep price. Each RS-25E will cost NASA nearly $150 million, which is more than what SpaceX charges for a flight on the Falcon Heavy. With a per-launch price that will easily exceed that of the infamously expensive Space Shuttle, it’s difficult to imagine how SLS can possibly remain competitive with reusable commercial vehicles set to begin operation within the current decade such as SpaceX’s Starship and Blue Origin’s New Glenn.

After examining the data, NASA says the automated abort during the January 16th engine test was due to intentionally conservative test limits intended to avoid unnecessary stress on the booster. In a press conference, Administrator Bridenstine said that had this been a real flight, the engines would have remained firing for the full duration necessary to reach orbit. He went on to explain that there is an inherent risk involved should NASA or prime contractor Boeing decide to rerun the full duration test fire, as the propellant tanks can only be filled and drained a finite number of times.

While nothing has been determined yet, these statements would seem to indicate that NASA may decide not to repeat the test fire and push ahead with the Artemis I mission to ensure they make the current November 2021 launch date. Conventional wisdom would say this is unwise, but as the first flight won’t have any human occupants, the usually risk-averse space agency might be willing to roll the dice if it means they can avoid another costly delay on a program that’s already facing fierce criticism.

On the other hand, live streaming the explosion of their first Space Launch System rocket to millions of viewers all over the world is hardly going to improve matters. A catastrophic failure during Artemis I would also very likely result in a delay to the crewed Artemis II that’s tentatively scheduled for August 2023. The resulting domino effect would likely make it all but impossible that NASA could make the already ambitious deadline for putting the first woman and next man on the lunar surface by 2024.