The Apollo program proved that humans could land on the Moon and do useful work, but due to logistical and technical limitations, individual missions were kept short. For the $28 billion ($283 billion adjusted) spent on the entire program, astronauts only clocked in around 16 days total on the lunar surface. For comparison, the International Space Station has cost an estimated $150 billion to build, and has remained continuously occupied since November 2000. Apollo was an incredible technical achievement, but not a particularly cost-effective way to explore our nearest celestial neighbor.

Leveraging lessons learned from the Apollo program, modern technology, and cooperation with international and commercial partners, NASA has recently published their plans to establish a sustained presence on the Moon within the next decade. The Artemis program, named for the twin sister of Apollo, won’t just be a series of one-off missions. Fully realized, it would consist not only of a permanent outpost where astronauts will work and live on the surface of the Moon for months at a time, but a space station in lunar orbit that provides logistical support and offers a proving ground for the deep-space technologies that will eventually be required for a human mission to Mars.

It’s an ambitious program on a short timeline, but NASA believes it reflects the incredible technological strides that have been made since humans last left the relative safety of low Earth orbit. Operating the International Space Station for 20 years has given the countries involved practical experience in assembling and maintaining a large orbital complex, and decades of robotic missions have honed the technology required for precision powered landings. By combining all of the knowledge gained since the end of Apollo, the Artemis program hopes to finally establish a continuous human presence on and around the Moon.

NASA says that a space station in orbit around the Moon will be an invaluable asset as the agency pushes ahead towards the large-scale exploration and development of the lunar surface. This station, which the agency calls “Gateway”, would allow for more elaborate missions by providing a rallying point for crews and their spacecraft. For example, a larger and more capable lander than those used during the Apollo missions could be assembled and checked out at Gateway ahead of the arrival of its assigned crew. After returning from the surface, the lander could potentially be refurbished and refueled at the station to be used on another mission instead of being discarded.

Beyond supporting lunar activities, NASA says that Gateway could be used as a laboratory for deep space research in the same way that the ISS is for low Earth orbit. Its location would be advantageous for heliophysics studies and Earth observation, and work is already underway on several scientific modules that could be mounted to the outside of the station. 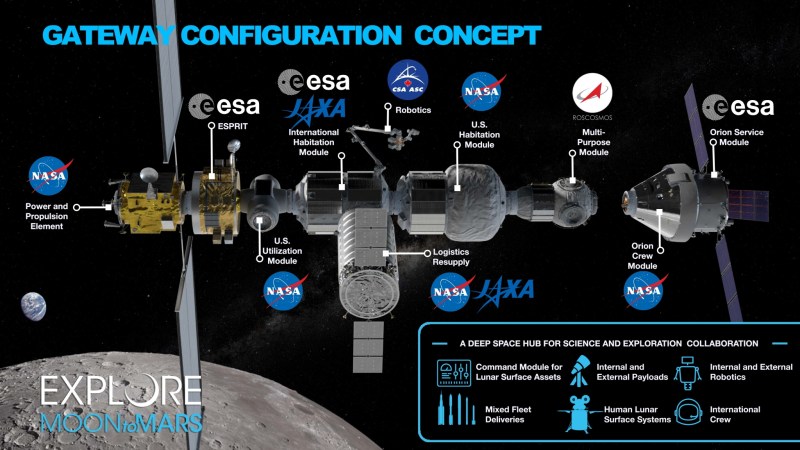 Expanding on the relationships developed during the construction of the International Space Station, NASA will be partnering with the Japanese, Canadian, and European space agencies to develop key Gateway modules. While details have yet to be finalized, it’s also expected that the Russian space agency Roscosmos will eventually contribute a module of their own.

Despite the incredible payload capacity of NASA’s own Space Launch System, it’s expected that many of the Gateway modules will ultimately be delivered to the Moon by commercial launch vehicles to reduce cost. The agency has also started looking for commercial partners who can perform regular resupply flights to the station, with SpaceX being recently being awarded the first “Gateway Logistics Services” contract.

Looking farther ahead, NASA says they want to establish a permanent outpost on the Moon called “Artemis Base Camp” that can house several astronauts for months at a time. The exact location for the Base Camp hasn’t been decided yet, but the proposal says that somewhere near the South Pole is the logical choice as it would offer long stretches of sunlight and a direct line-of-sight back to Earth. A number of references are made to the area around Shackleton crater, as it’s believed that large deposits of water ice lay at its shadowy bottom. The terrain in this area is also relatively smooth, which would make landing and surface navigation much easier.

To that end, the proposal also mentions the need for several ground vehicles at Base Camp. The lunar terrain vehicle (LTV) would be the modern-day equivalent to the “Moon Buggies” made famous during the Apollo missions, while the Habitable Mobility Platform would be a much larger vehicle capable of supporting extended treks away from Base Camp. Without this mobile command center, NASA says that astronauts wouldn’t be able to explore much more than a few kilometers from the Base Camp.

Over time, the infrastructure of Artemis Base Camp would be expanded and improved. Additional facilities providing everything from power generation to waste treatment would be constructed as NASA gains practical experience building structures on the lunar surface.

NASA doesn’t give any sort of timeline for the establishment of Artemis Base Camp, other than saying it would happen sometime after the planned 2024 Artemis III mission which would see the first human landing on the Moon in more than 50 years. An installation of this scale would likely take decades to construct, but given the agency’s goal of establishing a permanent presence on the Moon, that’s not necessarily a problem.

NASA ends the thirteen page proposal by saying that the lessons learned during the Artemis program will put the agency on track towards a human mission to Mars sometime in the 2030s. It says that a fully realized Gateway could allow crews to train for the months-long flight to the Red Planet, and that surface vehicles developed for the Moon could easily be repurposed for Martian use. The Moon can never be a perfect stand in for the unique challenges of a human mission to Mars, but there’s little question that further experience operating outside of low Earth orbit would be beneficial.

That said, until metal is bent and hardware is launched, it’s all just an idea. As we’ve seen time and time again with large NASA projects, securing the necessary funding is always a challenge. The agency also has to contend with political whims, as a program that stretches on for decades would need to have the continued approval of multiple Presidents. In reality there’s absolutely no guarantee that astronauts will one day set out from Base Camp on their LTVs to explore the rim of Shackleton crater; but we can hope.