Much like us, [AGBarber] digs all the infinity polyhedra already out there, but laments the fact that almost all of them are too large to be used as desktop conversation pieces. That’s probably because it’s a lot easier to build ’em big, but that didn’t stop [AGBarber] from trying, succeeding spectacularly, and paving the way for anyone who wants to take on the challenge of building a dazzling desk toy of their own. 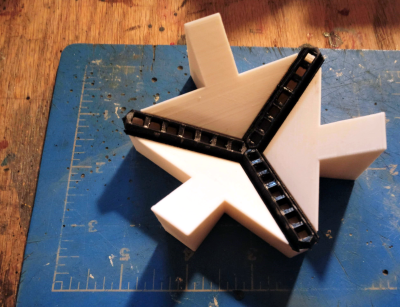 We all know that all those little strips of LEDs have to be chained together somehow. Wires would work fine in a larger version, but at roughly softball size, they become a tedious and fiddly nightmare. So what did [AGBarber] do instead? That’s right, they designed two different types of custom corner PCBs. The 3D printed brackets that hold the LEDs and the panels together are no cakewalk, either — [AGBarber] recommends using a resin printer if you have access to one, though it isn’t strictly required.

Everything about this project is open source, including a bonus printable jig for gluing the brackets together at just the right angles. All the steps are well-documented, from applying the mirror film to programming the Wemos D1 mini that controls the lights [AGBarber] programmed in a ton of animations, too, which you can watch after the break.

Want to build a small infinity thingy that isn’t quite so difficult? Crack open a cold one and check out these cool coasters.