We’ve all been there: you’re sitting at your bench, with a beaker full of some conductive fluid with a bunch of tiny particles suspended in it, and you want to measure the sizes of each particle.

Okay, maybe this isn’t a shared experience we’ve all had, but It’s at least an ordeal Hackaday alum [Nava Whiteford] has been through, and he was able to carry out the measurements in question using a neat apparatus known as a Coulter counter.

Imagine a container full of a conductive fluid. If you place an electrode at each end, the fluid will carry a current. 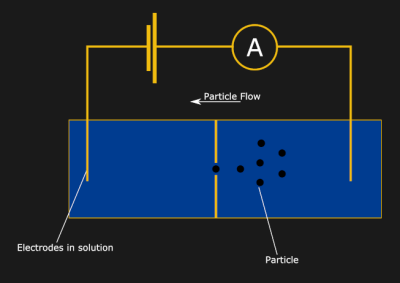 Now, drop an insulating divider in the middle of the container, and the current will stop flowing. Finally, poke a small hole (or nanopore) in the divider. Huzzah! The current is flowing again… but how does this let us measure particle sizes? Well, now think about a tiny particle moving through the hole in the divider. As the particle passes through, the hole will be partially blocked, and the current flow will be partially interrupted. It turns out, the resulting dip in current is proportional to the volume of the particle — a fun property known as the Coulter principle.

[Nava] built a great demo of the system with a macropore in place of the nanopore. The pore in question was a hole melted into a bottle cap, which was suspended in a beaker by two toothpicks. [Nava] used small chips of Acrylic as the particles to be measured, which they pipetted into the solution of KCl. They then passed a current through the solution and used an oscilloscope to sense the interruptions. Be sure to check out their write up for a video of the system in action!

Of course, this technique has a much wider range of applications than measuring little bits of plastic — obtaining blood cell counts, for one. We’ve seen particle counters for use in the air before, but it’s great to see that there’s a way to measure particles in an aqueous solution —  you know, in case we ever find ourselves in such a situation.

5 thoughts on “Bringing Some Coulter To The Bench: Measuring Tiny Particles With Nanopore Sensing”