You’d be forgiven for thinking these pictures of NASA’s Perseverance Mars rover were renderings of the real deal on the Red Planet, if it wasn’t for the golf ball tucked in for scale, anyway. What you’re actually looking at is a 3D printed model made by [Alex Givens] that he brought out to the desert for a photo shoot by his friend [Josh Jalil]. 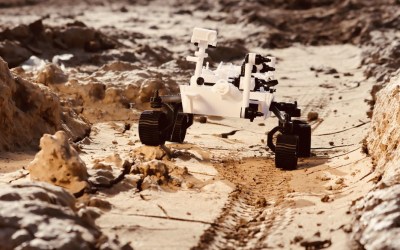 [Alex] printed the parts for the model on the Ender 5 Pro, while [Josh] snapped the shots using a Canon EOS 90D. The realism of the final shots serves as a testament to how well they’ve honed their respective tools, but credit for the 3D model itself has to go to the good folks over at NASA.

The highly detailed Perseverance model came from the space agency’s extensive “3D Resources” collection, which has models for an incredible array of present and historical spacecraft. They’ve also got models for a number of interesting astronomical objects, just in case you’re in the market for a 3D printed asteroid or two.

We know, this isn’t exactly a hack in the traditional sense. But it’s a fantastic reminder of a great resource from NASA, as well as a practical demonstration of how high quality photographs can really bring a project to life.

3 thoughts on “3D Printed Mars Rover Smiles For The Camera”