While the price of electronic paper has dropped considerably over the last few years, it’s still relatively expensive when compared to more traditional display technology. Accordingly, we’ve seen a lot of interest in recovering the e-paper displays used in electronic shelf labels and consumer e-readers from the likes of Amazon, Barnes & Noble, and Kobo. Unfortunately, while these devices can usually be purchased cheaply on the second hand market, liberating their displays is often too complex a task for the average tinkerer.

Enter the Inkplate. With their open hardware ESP32 development board that plugs into the e-paper displays salvaged from old e-readers, the team at e-radionica is able to turn what was essentially electronic waste into a WiFi-enabled multipurpose display that can be easily programmed using either the Arduino IDE or MicroPython. The $99 Inkplate 6 clearly struck a chord with the maker community, rocketing to 926% of its funding goal on Crowd Supply back in 2020. A year later e-radionica released the larger and more refined Inkplate 10, which managed to break 1,000% of its goal.

For 2021, the team is back with the Inkplate 6PLUS. This updated version of the original Inkplate incorporates the design additions from the Inkplate 10, such as the Real-Time-Clock, expanded GPIO, and USB-C port, and uses a display recycled from newer readers such as the Kindle Paperwhite. These e-paper panels are not only sharper and faster than their predecessors, but also feature touch support and LED front lighting; capabilities which e-radionica has taken full advantage of in the latest version of their software library.

With its Crowd Supply campaign recently crossing over the 100% mark, we got a chance to go hands-on with a prototype of the Inkplate 6PLUS to see how e-radionica’s latest hacker friendly e-paper development platform holds up.

The average Hackaday reader is well aware of the capabilities the ESP32 brings to the table: right out of the box you’ve got an impressively powerful processor, WiFi and Bluetooth connectivity, and some of the best power saving features available on a hobby microcontroller. It’s a perfect candidate for the sort of tasks most folks would want to do with an electronic paper display, and e-radionica were smart to make it the centerpiece of their product. They even sprung for the ESP32-WROVER version, with an expanded 8 MB of RAM.

Of course, if all you wanted was an ESP32 plugged into an e-paper display, you could get a module from somebody like Waveshare and be done with it. Which is why e-radionica included so many extra features on the Inkplate 6PLUS. You don’t need to wire in an external SD reader, because one’s already there. Need an RTC? All you have to do is slot in a battery. They even included a lithium ion charge controller and a connector for a battery pack, should you want to roll your very own e-reader. 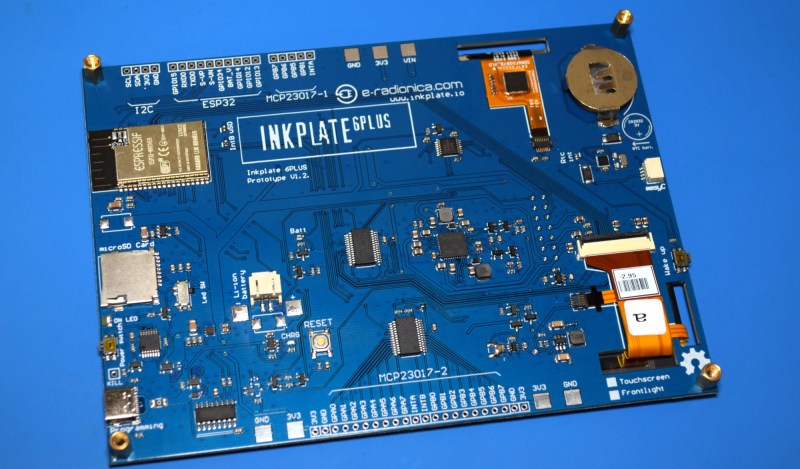 Hungry for more? As you’d expect, the ESP32’s I2C interface can be used to connect up various sensors or even secondary displays should you need them for your project. But if you’re worried about the notoriously limited GPIO on the ESP32, don’t be. Since the Bill of Materials for the board already included a sixteen channel MCP23017 IO expander that the microcontroller needed to interface with the e-paper display, e-radionica decided to add another one in for good measure.

All of the pins for the secondary MCP23017 are broken out along the edge of the Inkplate 6PLUS, giving you plenty of breathing room for future expansions. The standard width pin header even includes ground and 3.3 V lines, which should make it easy to put together daughterboards which plug right into the back of the display.

Even though it’s arguably the star of the show, I won’t spend much time talking about the 1024 x 758 e-paper display on the Inkplate 6PLUS. That’s because anyone who’s used a first or second generation Kindle Paperwhite has already seen it. While it might be a couple revisions behind the screen used in the current generation Kindle, it’s still a fantastic display. This isn’t some hokey panel from a nameless eBay seller, it’s literally the same screen that once graced the world’s most popular e-reader.

Images and text are crisp, and the lightning-fast partial refreshes really complement its touch capabilities. While full screen refreshes still take a beat or two, the panel is more than up to the challenge of displaying dynamic data and interactive menus.

Between e-radionica’s thoughtful board design and industry standard display technology, there’s no denying that the hardware here is excellent. But in this community, that’s only half the battle. If you want to succeed, you’ve got to have competent open source libraries, plenty of example code, and documentation that’s clear enough for absolute beginners to understand but still deep enough to satisfy the hardcore hackers.

On all those fronts, I’m happy to say e-radionica has delivered. Getting the display running with the Arduino IDE is about as quick and easy as humanly possible: just add the URL for the board definitions, install the Inkplate library through the browser, and flash one of the examples. Depending on your operating system you might have to install drivers for the board’s CH340 USB-to-serial converter, but that’s it. At the time of this writing the MicroPython module for the 6PLUS was not available, but looking at the process for getting it up and running on the previous Inkplates, it looks like it won’t be much more difficult to get going.

Browsing through the official documentation uncovers a wealth of resources, such as a complete API reference for the Arduino and MicroPython environments, and tools like the web-based GUI designer or image converter can really help jump start your project. Even if you’ve never worked with an e-paper display or touch screen before, the team has made sure you have everything you need to bring your idea to life.

While overall I found the Inkplate 6PLUS hardware and software to be extremely impressive, I did notice a few odd quirks. The board would often fail to reboot itself after having new code flashed, and on several occasions went into a sort of rapid boot loop. The screen is also inverted in the current version of the library, requiring you to add display.setRotation(2) at the top of each program to get it into the proper orientation. But these are really very minor quibbles, and considering this is still prototype hardware, it’s entirely possible these issues will be resolved before it starts shipping to backers.

If there’s any real fault with the Inkplate 6PLUS for most people, it’s going to be the price. At $159 it’s a tough sell for those just looking to dip their toes in the water, but in truth, that’s not necessarily a bad thing. If all you want to do is add a little e-paper weather display to your desk, this probably isn’t the product for you. Just grab a cheap 2.13 module from eBay and plug it into the header on a Pi Zero, there’s plenty of prior art to get you started.

But if you want a serious electronic paper development platform that’s fully open source and scalable to whatever project you could come up with down the line, you’d be hard pressed to find a better option than the Inkplate 6PLUS at any price.

13 thoughts on “Review: Inkplate 6PLUS”