Unpacking the badge it is clear that this is a solder kit. In addition to the main PCB and four daughter PCBs, there’s a small zipper bag of components in tape, along with two coin cells, a battery holder, and a beautiful color lanyard. You’ve got to put all of this stuff inside of a package to ship it, so the meme factory decided to roll out a pack of “Damonitos”, a play on Doritos-brand corn chips and the badge collective’s recently adopted hashtag-mascot, Matt Damon. I haven’t asked why and neither should you.

The thing is, there’s nothing programmable here; through and through this is a hardware badge. I’ll dive into the assembly details later on, but this looks like surface mount resistors, capacitors, and transistors, and one through-hole trimpot. It’s a clever way to sidestep the problem of reliably sourcing microcontrollers in any kind of volume in 2021.

The boards themselves are obviously the “After Dark” treatment of OSH Park (and sure enough, their logo is on the back of the board). The iconic treatment uses black substrate (the board itself), clear solder mask to let the copper traces show through, ENIG plating for golden pads, and white solder mask. 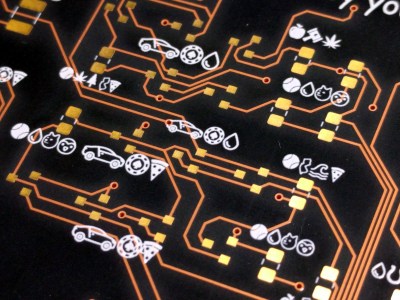 I think AND!XOR is hands-down the best at documenting their badges, but within a limit of the puzzles they design into them. In this case, most people would reach for the schematic and begin putting paste on the board for assembly. But head over to their project page and you’ll find no such resources available.

What you will find is encouragement to break the glyph cipher used as component reference next to each footprint on the back of the board. There are sixteen icons used in the key, which strikes me as nice number for hex-values, but I’m just spitballing. I have not yet had time to start work on this challenge, but it’s all I want to do right now. Not great for the outlook on getting my actual work done, thaaaaaanks AND!XOR.

Three-legged footprints are easy enough to figure out, but two different tape strips of transistors have me thinking that you’ll need to establish PNP versus NPN. Even if you get that sorted out, and crack the code on resistor values, there’s also a routing puzzle afoot.

The daughter PCBs themselves are an interesting part of the challenge. The front of each has two faces, split in half at the edges. Castellated edges on the tip and bottom match up with footprints on the front of the main PCB. For some reason this bring to mind slot machines, where you want to match up like images for each spin. On the back of the daughterboards you can see that electrically they each route traces to different destinations. 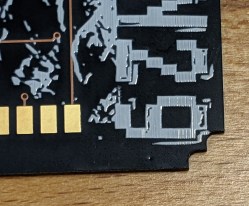 I’m told the board is sized to exactly match an official CDC COVID vaccine card (which I suppose also explains the alcohol wipe and bandaid that came with it). Other notable features include the “rounded” edges that use the 1980s style of 8-bit rounded corners. The square holes for badge lanyards continue the aesthetic.

While this doesn’t rise to the same heights as something like their DC27 badge which included phosphorescent stickers that integrated with the PCB, light pipes for dimensional effects, and masterful use of a stippled silk screen, we’re living in a very different world from two years ago. After our lives got turned upside down, it’s refreshing to see a new take that is much more accessible to your average person than the multiplayer, only-at-the-con challenges of previous years. Even if you don’t have this kit in your hands, you should be able to take images I included in this article, map the traces, and crack the code to figure out the circuit. I’m smitten.

AND!XOR put together 800 badge kits. So far about 400 have been sold through their online store. The rest will be given out in person at DEF CON 29, and they’ll once again resume their practice of having “local drops” at points around the globe. If you want to get one, and can tolerate — or even embrace — a constant stream of memes, follow their socials over the next few days.