The newest offering from the AND!XOR team is out and it delivered exactly what hardware badges were missing: light pipes. No joke, the DEF CON 27 edition AND!XOR badge will be most recognizable because of two arcs of light pipe material blinging RGB goodness in three dimensions. But if you can peel your eyes away from that oddity there’s a lot to love about the new design.

A Departure from Bender

Is this a Bender badge? Followers in the cult of #Badgelife will remember that the Bender character from the smash show Futurama has been the official mascot for the AND!XOR team since they began making badges. This badge goes away from that aesthetic and the design achieves a new depth with a gas-mask laden, hoodie-wearing character more reminiscent of Fallout. 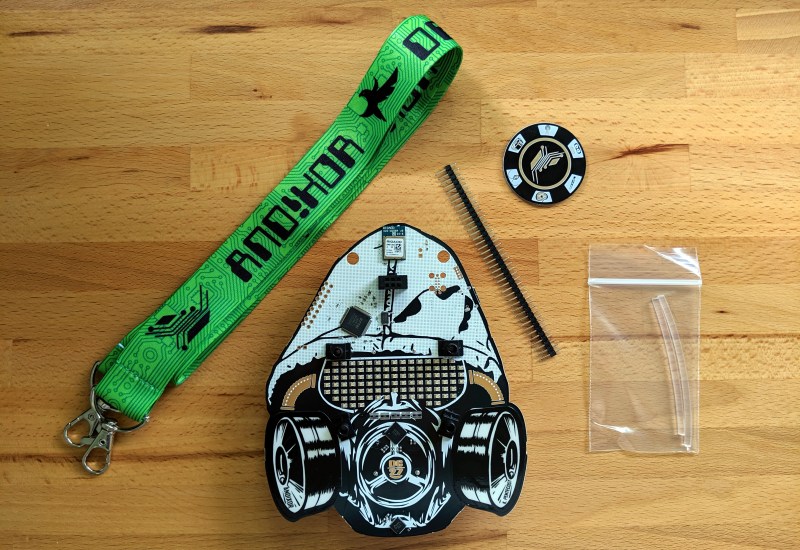 Yes, there’s a snappy RGB matrix in the shape of goggles, but it is the art and how it is treated on this board that really catches my eye. This badge looks fantastic even if it’s not switched on. The art is by Kevin Pentecost, a fan of the team who gave them the illustration during last year’s DEF CON.

The familiar PCB color palette of black, white, and gold is at work here, but it’s easy to mistake how it’s put to use. In this case the white is the solder mask, indicated by the exposed gold on either side of the goggles which has white reflection marks on it. The black silkscreen is put to work as a very fine matrix of dots on the hoodie, giving it both an interesting hue to the eye, and a texture under your fingers. Both have a glossy, picture-perfect finish.

But look closely and you’ll see a new trick at work: stickers. The two canisters for the gas mask are stickers whose finish makes it easy to use the capacitive touch scroll wheels built into the board underneath. At the same time, this brings glow-in-the-dark phosphorescent material to the badge.

All past version of AND!XOR badges have included a screen, either OLED or LCD. This one moves away from that in favor of the RGB LED matrix. I most closely associate the goggle layout with the DC Furs badge from 2018. It was a great idea then and it’s a great idea now. Layout breaks up the monotony of a rectangle for an obvious reason, yet still allows scrolling characters as you would with a drab LED sign. Where you could have had a 7×17 matrix, you lose just 17 LEDs to the artistic shape for a total of 102 pixels. It’s the best of both worlds. I don’t miss screens at all here — how can a badge compete with what’s on your smartphone? This competes in a way no smartphone can begin to imagine.

There are two things I don’t like about the front of the badge: the add-on connector and the Rigado module, both near the top of the board interrupt the beautiful design of the rest of the board. There’s an easy solution for that: cover them up with an add-on. AND!XOR sent me all three modules they’ve been involved with this year, and that’s one of the most interesting developments this year.

When Add-Ons Outgrown Being Dependent on a Badge

Kudos to Hyr0n who stopped calling these “Shitty Add-Ons” and started calling them “Superior Add-Ons”. They went all-in on the designs and what we’re actually talking about are stand-alone mini-badges that happen to be compatible with plugging into other badges.

The team sent me all three add-ons. There’s the basic bender, the Audio Reactive SAO (rev 6), and the Doom SAO (rev 1) from AND!XOR’s newest team member, Parker Dillman. (You likely know Parker from the Macrofab podcast which is part of his day job.) All three have microcontrollers on board running the show, while offering access to the outside world through the I2C pins of the 3×2 header that is the SAO V1.69bis standard.

Bender does a great job of returning the team’s mascot and supplying classic bling of their first ever badge. At the same time, there’s a hidden serial output. If only you had something to read that output. Hey, you’re in luck! The AND!XOR DC27 badge itself is a hardware hacking tool that can sniff serial (I’ll get to that in a minute). Actually, the Doom SAO could do it too. In addition to returning a screen to the badge, the Doom guy SAO has a serial sniffer built in that can read the output of the Bender add-on. The third add-on has an electret mic and flashes its LED based on ambient noise.

A Lap Around the Hardware 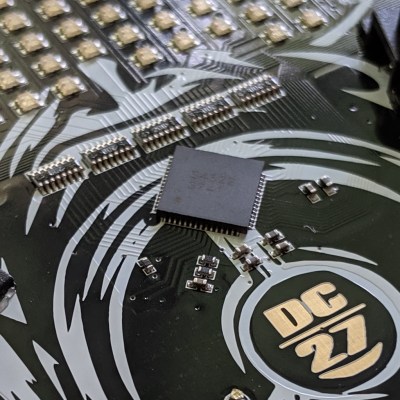 Let’s take a step back and marvel at what we can do with a handful of ICs and very few passives. Driving the system is a Rigado BMD-340 module which is a familiar feature of the team’s 2017 badge. It runs an NRF52840 core and provides wireless connectivity for the botnet game played between these and other badges at the conference.

The bling is handled by an ISSI chip along with the help of five resistor networks. This year it’s the IS31FL3741. The routing of this display contains hidden beauty for those who look really closely. User for the badge input is handled by capacitive touch using the Azoteq IQS333 to monitor two scroll wheels and the center pad of the DC27 design shown here. All of this is powered by just two AA batteries thanks to the Skyworks boost converter (AAT1217-3.3).

This badge, and the Doom SAO, are pulling us into the 21st century with the use of USB-C connectivity. The tried and true LM1117 regulates incoming power from that connection. A beefy FTDI FT2232H makes two separate USARTs available for this board. I mistakenly tried out ttyUSB0 for my serial connection out of the gate and got a fat nothing-burger. That’s because the Alternate Reality Game is on USB1, the USB0 connection is for the in-built hacking tools.

I’m not entirely sure what I think of the light pipes on this badge. It’s certainly a useful trick to keep in mind for future designs. The plastic receptacles snap onto the board through two small holes each. Straddling an RGB LED on the face of the board, these provide a fixture for the flexible light-pipe material. As you can see in the image a the top of the article, they do a good job of diffusing some light out of the sidewalls of the tube, and if you look into the end of the pipe, the light emission is very strong.

The Lulz Lurk Inside

I like seeing consideration given to making these badges worth keeping around after the conference. (Who am I kidding, they’re works of art and everyone keeps them around.) For the DC27 badge, AND!XOR spent time making as much use out of the FTDI chip as possible and ended up with a multi-tool for hardware hacking that speaks serial, I2C, SPI, and even JTAG via OpenOCD.

DIP header for logic analyzer, etc. What a curious footprint just below that!

Don’t want to deal with hardware protocols? You can bang your head against the digital wall trying to solve the Alternate Reality Game instead. Think Zork, but waaaay more snarky. This is the part of the AND!XOR universe that I always wish I spent more time in. When you terminal into the badge you can get a list of commands by hitting tab. (Protip: turn your caps lock on.) From there you can issue commands that may control the badge itself, the text-based story game inside of it, or the botnet being played wirelessly with other badges.

To be truly successful, you have to look around for tangential puzzles to solve, like the cipher on the back of the badge. I also noticed a peculiar flashing when the DC27 is displayed on the LEDs at startup and I’d wager there’s data hidden there. You’ll find clues in the launch video, on Twitter, and who knows where else.

The Magic is In How It’s All Pulled Together

All-in-all this a lovely piece of hardware, but the real magic is in the entire package the AND!XOR team manages to pull together for this and every previous year of their adventures. I’m amazed by their creativity in packaging along — last year they shipped in burlap bags and this year you get a sleeve in the style of the US Military “Meal, Ready-to-Eat”. Every year there is new hardware involved that I hunger to see as soon as the badge comes out — last year I ogled the GreenPAK NVM and the ISSI driver, this year it’s the light pipes and the stickers. And the alternate-reality game is beyond compare — AND!XOR did such great work with the wireless protocols that they’ve been adopted by numerous other badge makers over the years to join the botnet game, and the text-based realm within the badge is delightful and deeply engaging.

They have a huge following and are highly skilled at driving a whisper campaign that drops hints throughout the year and throughout the con. The media they put together around the project — from the stunning images and videos to the superb and thorough documentation — leave me dumbfounded. And this year they’re trying something new, offering up only about 25% of their badges to backers, which have already sold out. The cost of the other 75% of the badges has been covered by corporate sponsorship so the team will be giving away badges at DEF CON 27 and B-Sides Las Vegas for free with preference to people participating in the community nature of the events: speakers, people helping out, etc.

All of this adds up to something more than designing and selling badges. This is a movement that means something and stands for something. What that “something” is largely depends on who shows up and takes part, and I really like that.