We always knew that McDonald’s soft serve (you can’t really call it ice cream) machines are known to be finicky. There’s even a website that tracks where the machines are broken and, apparently, it is usually about 10% or more of them at any given time. But when we saw a news article about a judge issuing a restraining order, we knew there must be more to the story. Turns out, these $18,000 soft serve machines are in the heart of something we are very interested in: when do you own your own technology?

There are apparently 13,000 or so of these machines and they are supposedly high-tech marvels, able to produce soft serve and milkshakes at the same time. However, they are also high maintenance. Cleaning the machine every two weeks (try not to think about that) involves a complete teardown. Worse, if anything breaks, you need a factory-authorized service person. 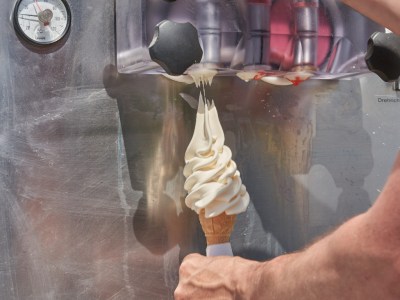 At the heart of this is a secret menu that requires an undocumented set of keypresses to enter. We’ve seen that before, of course, and apparently, it isn’t that secret, since a quick search found the exact sequence required in their service manual from the manufacturer (Taylor). However, a third-party company developed a box called Kytch that intercepts data from inside the Taylor machine and presents it on WiFi including all the secret service data. Their website proudly proclaims it is a Raspberry Pi that you install inside the machine and somehow connects to an internal bus to monitor the machine’s operation. The add-on aims to make it easier to track what’s going on with the machine, and that includes keeping it in working order.

Hackaday readers won’t find that whole concept very odd. We do this sort of thing all the time and the only reason we probably haven’t seen this on the tip line is the surprising lack of soft serve machines inside hackerspaces. But we’ve seen the same idea for washing machines and plenty of other gear.

The problem here is that Taylor and McDonald’s have been unhappy that restaurant operators are using the device. Kytch, who make the add-on box, are unhappy that Taylor has tried to acquire their device which contravenes the Kytch license agreement with its users and filed a lawsuit about it back in May (PDF). So there would seem to be plenty of lawyers involved.

Ironically, the founders of Kytch started by fixing the Taylor machines to combat problems in integrating the machines with their frozen yogurt robot, an endeavor supported by Taylor. They did decline to share the internal protocols of their machines with them, but otherwise were cooperative with the team and clearly knew they were thinking of closer integration between the two machines.

We don’t know which way the courts will finally resolve this issue. On the one hand, we are big fans of being able to hack equipment you own, especially machines that cost $18,000, break often (resulting in lost sales), and require exclusive service contracts.

On the other hand, it’s easy to see the McDonald’s corporation would want to ensure the consistent quality of the frozen treats and avoid any possible health hazard to the public. After all, bad ice cream has killed before. This is especially true for these machines.

Remember, I mentioned they have to be cleaned every two weeks? A normal ice cream machine needs to be cleaned at least every few days if not every day. The McDonald’s machine has a special 4-hour heating cycle that pasteurizes the contents of the machine so it doesn’t require cleaning as frequently. The machine heats up and then refreezes everything, presumably killing any bacteria starting to grow in the mix. This is a big time saver as you can see from watching someone clean out a regular machine in the video below.

Then again, there are a lot of dangerous things out there and only authorizing one company to work on them isn’t the answer. Electricity and natural gas are dangerous, but you don’t have to work for a utility company to do a job. You might need a license showing you understand what to do, but that’s a different proposition.

I think the logical thing is to play “what if”. What happens if you use the secret menu functions by yourself to repair the machine? You are relying on some fast food worker to clean the machine, after all. Does this add to that danger? Or does it even enable you to do anything differently? After all, working on a car can be dangerous, but no one would consider a code reader a safety hazard — it is just information.

For example, a story from Wired reports that a Kytch user found an employee was adding too much of a consumable into the machine and this was causing the cleaning cycle to fail. Apparently, that information was not available by traditional means and it doesn’t seem like there’s much harm to that.

The restraining order deals with the idea that Taylor acquired a Kytch machine for reverse engineering. They had attempted to just buy one, but when that didn’t work, they allegedly grabbed one off a machine sent in for service. Honestly, it is hard to imagine that Taylor couldn’t figure out how the device worked even without seeing one first hand. After all, they know what busses they expose and what’s on them. Building a Web interface on a Raspberry Pi isn’t exactly a top secrete technology.

On the one hand, we applaud people wanting to hack machines and make them better, more reliable, or easier to repair. We don’t like companies locking things up and holding you hostage for maintenance contracts. Yet we also think suing a company for getting a copy of your product that interfaces with theirs isn’t a great move either. I’m not a lawyer, but it seems like restraint of trade or libel would be better attacks, at least from a merit standpoint.

What do you think? Other than, of course, you sure could go for a milkshake.