University of Toronto researchers have succeeded in converting used cooking oil — from McDonald’s, no less — into high-resolution 3D printing resin. Your first response might be: “Why?”, but thinking about it there are several advantages. For one thing, waste oil is a real problem for the food industry, and thus it can be acquired rather cheaply. An even bigger benefit is that the plastic that originates from this oil is biodegradable. Their 3d-printed butterfly, of course, is made from the recycled resin.

We aren’t chemists, but apparently 3D resin has a lot in common with cooking oil already. The team used a one-step chemical process to convert one liter of McDonald’s greasiest into a little more than 400 milliliters of resin.

END_OF_DOCUMENT_TOKEN_TO_BE_REPLACED

If you’ve visited a McDonald’s recently, you might have noticed something of a tonal shift. Rather than relying on angsty human teenagers to take customer orders, an increasing number of McDonald’s locations are now using self-serve kiosks. You walk up, enter your order on a giant touch screen, and then take an electronic marker with you to an open table. In mere minutes your tray of cheap food is brought to you by… well that’s still probably going to be an angsty teenager. 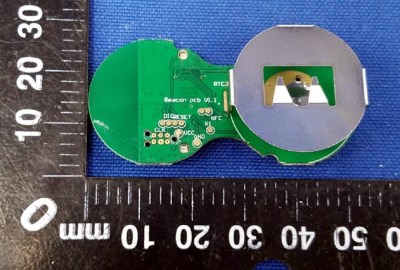 Thanks to a recent FCC filing pointed out to us by an anonymous tipster, we now know what kind of tech Ronald has packed into the electronic table markers (referred to as “tents” in McDonald’s parlance). It turns out they are Bluetooth Low Energy beacons powered by the Nordic nRF52832 chipset, and include some unexpected features such as an accelerometer to detect falls.

The Nordic nRF52832 features a 32-bit ARM Cortex M4F processor at 64 MHz with 512 KB flash and 64 KB SRAM. Quite a bit of punch for a table marker. Incidentally, this is the same chip used in the Adafruit Feather nRF52 Pro, so there’s already an easily obtainable development toolchain.

A image of the backside of the PCB shows a wealth of labeled test points, and we imagine figuring out how to get one of these table markers doing your own bidding wouldn’t be too difficult. Not that we condone you swiping one of these things along with your Quarter Pounder with Cheese. Though we are curious to know just why they need so much hardware to indicate which table to take a particular order to; it seems the number printed on the body of the device would be enough to do that.

This isn’t the first time we’ve taken a peek behind the Golden Arches. From reverse engineering their famous fries to hacking the toys they give out with Happy Meals, there’s more to do at the local McDonald’s than get thrown out of the ball pit again.

McDonald’s is serious about their fries. When they were forced by shifting public opinion (drunkenly swaggering around as it always does) to switch from their beef tallow and cottonseed oil mixture to a vegetable oil mixture; they spent millions to find a solution that retained the taste. How they make the fries is not the worlds most closely guarded secret, but they do have a unique flavor, texture, and appearance which is a product of lots of large scale industrial processes. [J. Kenji López-Alt] decided to reverse engineer the process.

His first problem was of procurement. He could easily buy cooked fries, but he needed the frozen fries from McDonald’s to begin his reverse engineering. McDonald’s refused to sell him uncooked fries, “They just don’t do that,” one employee informed him. He reached out to his audience, and one of them had access to a charlatan. The mountebank made quick work of the McDonald’s employees and soon [J. Kenji] had a few bags of the frozen potato slivers to work with.

What follows next was both entertaining and informative. At one point he actually brought out a Starrett dial caliper to measure the fries; they were 0.25in squares in cross section. Lots of research and experimentation was done to get that texture. For example, McDonald’s fries aren’t just frozen raw potatoes. They are, in fact; blanched, flash fried, frozen and then fried again. Getting this process right was a challenge, but he arrived at similar fries by employing his sous vide cooker.

He then wanted to see if he could come up with a french fry recipe that not only allowed the home chef to make their own McDonald’s fries, but improve on them as well. It gets into some food chemistry here. For example he found that the same effect as blanching could be produced by boiling the fries; if you added vinegar to keep the cell walls from disintegrating.

The article certainly shows how knowledge of the chemistry behind cooking can improve the results. This is a look at the brain surgery which [Tim] performed on a Happy Meal Toy. The McDonald’s package meal perk comes with one of several different Despicable Me 2 characters. But [Tim] wasn’t a fan of this one since you had to blow in it to make noise. He grabbed a 555 timer and added his own circuit to the toy which turns it up to 11 (seriously, turn your volume down before playing the video).

Disassembly includes removing a screw which needs a 3-sided screwdriver (protip: use a bench grinder and a cheap screw driver to make your own). There’s also some prying to get into the skull and then its time to work on the slide whistle. The blue tube is a regular slide whistle which you blow into from the back and pull on the red goo to change the pitch. [Tim] added a photoresistor to the mouthpiece and an LED on the slide. Moving the light source changes the intensity which is one of the adjustments to make 555 circuit howl.

We love the Happy Meal toy hacks because they seem so visceral. A couple years ago it was parts harvesting from Avatar toys. which in turn inspired a tripwire hack with a Penguin toy.

END_OF_DOCUMENT_TOKEN_TO_BE_REPLACED [malikaii] needed to set up some kind of tripwire style alarm system for his office. His bosses kept sneaking in to find him slacking. So, like any loyal hacker, instead of just working harder he built an alarm system. After a failed attempt to recreate an IR alarm circuit he found on the web and built from old appliance parts, he found the Hack a Day article about harvesting McDonald’s toys. The end result was a fully functional IR detecting alarm for the office doorway. This is pretty simple really, the best kind of hack.

We saw [Kevin’s] home-built Linear Variable Differential Transformer in a YouTube video last week and wanted to know more. We’re in luck, he agreed to share all the details as well as a bunch of information on these sensors. An LVDT is used to measure distance along a straight path. Unlike a linear optical encoder, this method uses measurements of inductance between two electrical coils to judge the distance.

[Kevin] used some magnet wire wrapped around two straws of different diameter to fabricate his sensor. A signal generator is connected to the primary coil and the resulting signal induced in the secondary coil is measured to reveal the change in physical position. Check out the video after the break to see the results.

It’s not hard to get your hands on a McDonald’s straw (hence the name ‘Mc’LVDT), a smaller inner straw, and a few feet of magnet wire. This will be a fun one to try when those dark winter days start to get to you.