The 30th anniversary of the World Wide Web passed earlier this year. Naturally, this milestone was met with truckloads of nerdy fanfare and pining for those simpler times. In three decades, the Web has evolved from a promising niche experiment to being an irreplaceable component of global discourse. For all its many faults, the Web has become all but essential for billions around the world, and isn’t going anywhere soon.

As the mainstream media lauded the immense success for the Web, another Internet information system also celebrated thirty years – Gopher. A forgotten heavyweight of the early Internet, the popularity of Gopher plummeted during the late 90s, and nearly disappeared entirely. Thankfully, like its plucky namesake, Gopher continued to tunnel across the Internet well into the 21st century, supported by a passionate community and with an increasing number of servers coming online. 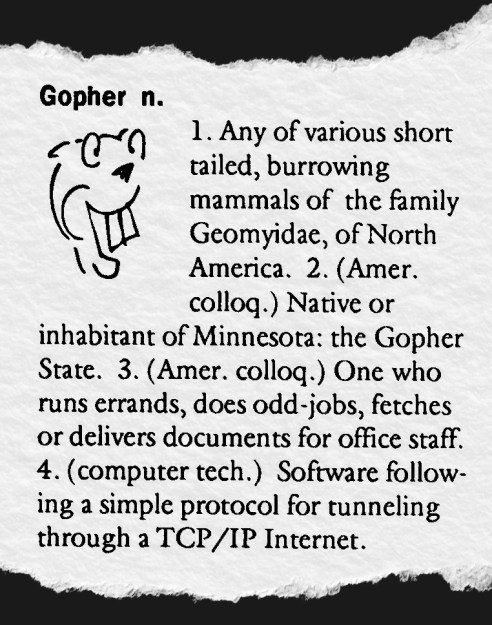 In the northern summer of 1991, while the primordial Web was being bootstrapped at CERN, the first Gopher servers were coming online at the University of Minnesota (PDF). Spawned from the need for a campus-wide information system, the Gopher client and server software eventually escaped out onto the wider Internet, and into the hands of eager early adopters.

The name ‘Gopher’ is a play on ‘Go-fer’, usually an employee or volunteer that fetches and delivers item requests. In the same way, the Gopher client was designed to be able to retrieve information from a Gopher server, and present that information in a human-readable format. The gopher also happens to be the University of Minnesota’s mascot.

For a time, Gopher was the new hotness. Users could search for and find text files via way of a simple hierarchical menu structure, reminiscent of Web hyperlinks but more regimented in their implementation, and not unlike the file and folder structure of contemporary operating systems. Setting up a Gopher server was relatively easy and only required modest hardware – reportedly, the first Gopher servers used off-the-shelf Apple computers, including the Macintosh IIci and SE/30 running A/UX (Apple UNIX).

While a resource in its own right, Gopher acted as a jumping off point to other parts of the Internet. If something wasn’t available on Gopher, chances were you could tunnel from Gopherspace all the way to the Web, or to an FTP server, or to a newsgroup, to find the content you were looking for. Veronica (or “Very Easy Rodent-Oriented Net-wide Index to Computer Archives”) was a robust Gopher server search engine, and was constantly expanding its database of Gopher sites. Other services such as Wide Area Information Server (WAIS) were also available.

While Gopher had a promising start, the Web was destined to become the preferred method of accessing information on the Internet. Hypertext steadily grew in popularity among the masses, fueled by the likes of NCSA Mosaic, one of the first mega-successful Web browsers. The rigidity of Gopherspace was starting to look a little tired when compared with the colorful and illustrative Web, which was becoming increasingly more ‘surf-able’, thanks to speedier modems and their ability to support a richer multimedia experience. Despite some truly fascinating experiments such as GopherVR, community concerns over licensing costs imposed by the University of Minnesota was the figurative straw that nearly saw the end of Gopher forever. By the late 1990s, Gopher servers had become an endangered species, while the Web reigned supreme as the premier Internet experience.

It’s been decades since Gopher was last in vogue. There is a desire, nay, an assumption today that accessing the Internet must be a bombastic multimedia experience, a characteristic that bolstered the early Web to where it is now. With its roots as a relatively pedestrian (if not efficient) method to transfer research data, the Web is now central to how we consume media. It goes without saying that the Web has eclipsed Gopher in almost every respect, and it’s understandable that some would see Gopher as a peculiar, vestigial relic of the old Internet.

I first logged onto Gopher earlier this year, long past its prime, and was instantly met with a certain je ne sais quoi. Nostalgia and desiderium came in waves. Here was a service quite utterly different to the Web, but not for the reasons that I expected.

The first session started over at gopher://gopher.floodgap.com:70, but it didn’t take long to start traversing Gopherspace at warp speed. The text-only interface certainly made things speedier compared to the relatively bloated Web, but the real speed came from the simplicity of the layout – regimented menus, all alike but clearly labelled, meant that navigation through Gopherspace was effortless. Text-only formatting ensured that every single piece of content was as legible as the next. Weather and news were easily accessible, as was software (especially for vintage computers), phlogs (Gopher blogs) and more. Veronica-2, a revision of the original Veronica search engine, is Gopher’s answer to Google (although ‘I Veronicaed it’ isn’t as catchy). Further digging revealed modern proxies for reddit and Wikipedia, both welcome finds that further delayed my inevitable return to the Web.

Using Gopher was not only intuitive, it was fun. Framing Gopher as a vestigial relic of the old Internet doesn’t do it justice – using the service felt genuinely informative, and in many respects it bested the Web.

Modern clients have made getting onto Gopher easier than ever – or at least as easy as it used to be, as today’s browsers have dropped support for Gopher. The Overbite project has solutions for using Gopher on older versions of Firefox, but there are several standalone GUI clients available for all major operating systems. Lynx naturally supports Gopher, and is a great choice for computers of any age. Clients are also available for modern smartphones.

If finding a client is too big a hurdle, there are proxy services available that allow access to Gopher content over HTTP, such as the Floodgap Public Gopher proxy. This allows Gopher sites to render in almost any modern HTTP browser, and is a great choice for first timers.

Speaking of Floodgap, users old and new will often find their Gopher sessions starting on the Floodgap server at gopher://gopher.floodgap.com:70/. This server has been accessible since 1999 and lists all the major services and sites that Gopher has to offer. Floodgap also has plenty of helpful tips and tricks for new Gopher users, and does a great job at explaining the Gopher philosophy.

Once you’ve leapt into Gopherspace, there’s not a lot more that needs to be said on ‘how’ to Gopher. The experience can feel very linear, and this can either be a good thing or a bad thing depending on your point of view. At times, navigating Gopher can feel like browsing a catalogue of files on a local disk, jumping from one folder to the next, examining files, then traveling backwards on the path just traveled, up to another jumping off point. A text-based browser like Lynx feels especially fast for this kind of hierarchical navigation.

Downloading files is similarly effortless, which is a good thing since most Gopher browsers don’t support in-line images (although more are adopting this functionality as time goes by).

Learning ‘how to Gopher’ is, at most, a five minute exercise.

Gopher is very much a product of its time. While this is somewhat charming, there are some concerns around individual privacy.

Encryption? Forget about it. This makes using Gopher an effortless experience for even the oldest of computers, however it’s worth noting the potential privacy issues. Much like the early WWW, your browsing history, form submissions and other information is all transmitted in plain text, meaning that it’s a trivial task to intercept this data. Currently, it’s not a good idea to use Gopher for anything vaguely private or personal. There are proposals and back-of-the-napkin concepts on how to deal with encryption on Gopher, but to date there has been precious little progress in this area. Projects like Gophernicus might be of interest to those looking into setting up a Gopher server with extra security.

In contrast to the modern Web, publicly accessible server logs are most definitely a thing on Gopher, even on relatively popular servers like Floodgap. It’s possible to track (or be tracked) all over Gopherspace through these logs, and it’s something to keep in mind if you’re at all conscious about security and privacy.

Take Your Next Vacation in Gopher Country

Let’s get this out of the way – there is some irony in advocating for Gopher on the World Wide Web. But here I am, doing just that.

It would be all too easy to compare Gopher’s ousting as a viable Internet protocol with many of the other ‘format wars’ from the previous decades — VHS over Betamax, Blu-Ray over HD-DVD. When framed this way, it would make sense to attribute any talk of a Gopher resurgence to technological neanderthals, perhaps those that still have a chip on their shoulder after the ‘war’ was lost in the 1990s.

For better or for worse, we will now always spend the majority of our online existence on the Web. The resounding success of the Web to capture people’s imagination doesn’t mean that Gopher is a write-off, a relic. These days, it’s actually quite the opposite. Where it once competed for dominance, Gopher now exists in harmony with the Web. HTTP proxies allow access to Gopher content, blurring the lines between the two protocols. For those that decide to dig deeper, they’ll realise that Gopher was never really defeated after all — it exists now as it (pretty much) always did, a refuge for people and content that doesn’t quite fit onto the Web.

Cameron Kaiser, sysadmin for the Floodgap server, puts it nicely in a phlog:

It would be remiss to dismissively say Gopher was killed by the Web, when in fact the Web and Gopher can live in their distinct spheres and each contribute to the other.  With  the modern computing emphasis on interoperability,  heterogeneity  and  economy, Gopher continues to offer much to the modern  user, as  well  as  in  terms of content, accessibility and inexpensiveness. Even now clearly as second fiddle to the World Wide Web, Gopher still remains relevant.

My brief sojourn down into Gopherspace started as a nostalgic trip, but has genuinely left an impact. While the Web has long overtaken Gopher as our primary medium for online communication, webmasters would do well to take inspiration from Gopher.

Check out Where Have all the Gophers Gone for more fascinating insights about the rise and near-extinction of Gopher, as well as articles by Minnpost and TidBITS.

74 thoughts on “Gopher, The Competing Standard To WWW In The ’90s Is Still Worth Checking Out”