There was certainly no shortage of unique computers on display at the 2021 Vintage Computer Festival East; that’s sort of the point. But even with the InfoAge Science and History Museum packed to the rafters with weird and wonderful computing devices stretching back to the very beginning of the digital age, Alastair Hewitt’s Novasaur was still something of an oddity.

In fact, unless you knew what it was ahead of time, you might not even recognize it as a computer. Certainly not a contemporary one, anyway. There’s nothing inside its Polycase ZN-40 enclosure that looks like a modern CPU, a bank of RAM, or a storage device. Those experienced with vintage machines would likely recognize the tight rows of Advanced Schottky TTL chips as the makings of some sort of computer that predates the 8-bit microprocessor, but its single 200 mm x 125 mm (8 in x 5 in) board seems far too small when compared to the 1970s machines that would have utilized such technology. So what is it?

Inspired by projects such as the Gigatron, Alastair describes the Novasaur as a “full-featured personal computer” built using pre-1980 components. In his design, 22 individual ICs stand in for the computer’s CPU, and another 12 are responsible for a graphics subsystem that can push text and bitmapped images out over VGA at up to 416 x 240. It has 512 K RAM,  256 K ROM, and is able to emulate the Intel 8080 fast enough to run CP/M and even play some early 80s PC games. 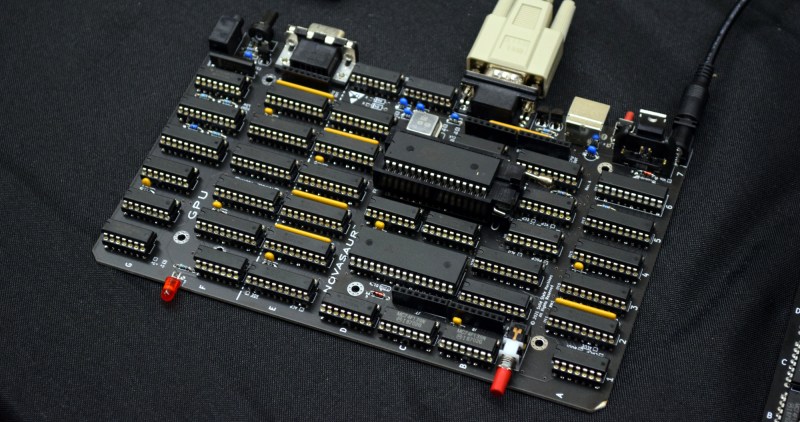 Arguably the most noteworthy feature of the Novasaur is it’s ability to emulate a vintage CPU. By taking this approach, Alastair essentially ensured that the only software he’d ever technically have to write for the computer would be a hardware abstraction layer. Once that was in place, he could simply load up existing programs and operating systems that were designed to run on the emulated chip.

Generally speaking, TTL computers need to have new applications written for them. To use the Gigatron as an example, the system’s ROM provides the user with a handful of tools and games that were written specifically for the hardware. But outside of that, your best bet for getting new software on the system would be to use the Tiny BASIC interpreter and write it yourself.

The Novasaur’s ability to run CP/M and existing Intel 8080 software makes it a far more practical machine than others we’ve seen in the past, and is central to the claim of it being a “full-featured personal computer” rather than just an experiment in computing minimalism. But interestingly, a look through the project log shows that the decision to go with the 8080 didn’t happen until relatively late in the game. Originally, Alastair was aiming for his machine to be compatible with something in Motorola’s 6800 family of chips, or perhaps some subset of the MOS 6502.

It would be almost a year later before he made a post explaining his decision to target the relatively overlooked RCA 1802 COSMAC. A month later, at the recommendation of Gigatron’s creator Marcel van Kervinck, he reevaluated the situation once more. Originally he’d been put off by the complexity of the Z80, but the Intel 8080 seemed to offer a reasonable middle-ground. As it takes his computer 137 cycles to complete one CPU instruction, Alastair says the final emulated CPU is operating at approximately 450 kHz, or around 22% as fast as the original hardware. 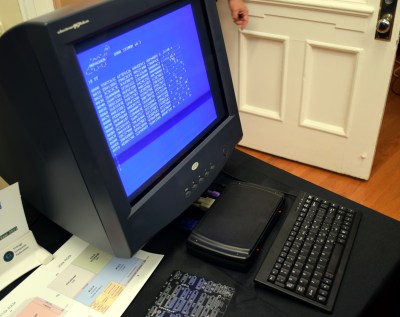 While the Novasaur is an incredible accomplishment itself, one also has to give credit to Alastair for the phenomenal documentation he’s put together. Since the beginning of 2019, he’s been documenting every step that’s gone into the planning, design, and construction of his TTL computer through log updates on the Hackaday.io page.

The fact that we can look back and see exactly what promoted him to switch gears and start focusing on Intel 8080 compatibility or what it looked like the first time the graphics system lit up a real CRT display, is an invaluable resource for others who might be working on similar systems. Of course even if you’re not looking to build a TTL computer of your own, it’s still fascinating to see how it all came together.

There’s some irony that, even though it was on display at the Vintage Computer Festival, the Novasaur was almost certainly one of the newest pieces of hardware in the building. After all, the PCB just hit its final (for now, at least) revision over the summer.  Even still, there were few other machines that felt as truly personal as this labor of love, and I’m glad that VCF not only gave me the chance to see it up-close, but to meet its exceptionally passionate creator.