It didn’t take long to realize that the 2021 Vintage Computer Festival East — returning to the InfoAge Science and History Museum in Wall, New Jersey after being held virtually last year — was a massive success. In fact, the first clue came before I even got out of my car. When a volunteer came up to my window to apologetically explain that the primary parking lot was already full and I’d have to drive down the road to an overflow lot, there was no question about it; a whole lot of folks were more than ready to shake off those pandemic blues and get back to business.

They certainly picked a great event for it. While VCF East has always been a highlight of the East Coast hacker’s year, it was obvious things were really turned up to the max for this much-anticipated return to an in-person festival. With respect to all those involved in previous events, things just felt more cohesive and better organized this time around.

Veteran attendees I spoke to all felt like they were witnessing the event going through an evolutionary change into something bigger and better, while first time fliers were impressed with the buzz of activity and breadth of what was on display. In short, admiration for the event and the people working behind the scenes to make it possible was unanimous.

It’s simply not possible to adequately summarize a multi-day event like VCF East in a single post, so I won’t try to. This article, and the ones to follow it, serve only to document some of the highlights from my own personal time wandering through the sprawling InfoAge campus. Ultimately, there’s no real substitute for making the trip to Wall, NJ and experiencing this incredible event for yourself. But if that’s not an option for you, hopefully the following will give you a little taste of what the Vintage Computer Federation labors so hard over every year.

Evolution of the ENIAC

One of the benefits of going to an annual event like VCF East is that you occasionally get to see people’s passion projects develop over time. What might have been little more than a proof of concept when you first saw it could end up being the talk of the show two or three years down the line. Which is precisely how I felt when I came across the group of people crowded around Brian Stuart and his expanded ENIAC simulator. 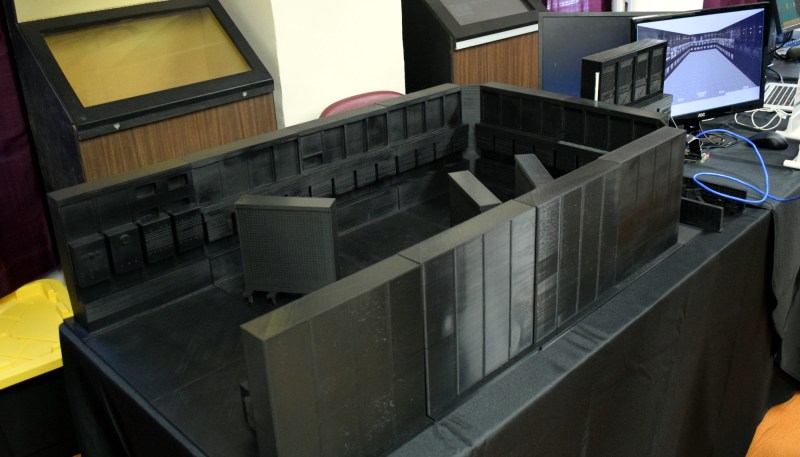 When I last saw his project in 2018, it took the form of a Raspberry Pi, a couple displays, and a 3D-printed hand controller modeled after the single close-up photograph Brian was able to find of the actual control units that operators would used at the time. But that was just on the physical level. In terms of software, he had already managed to simulate the ENIAC down to the individual electrical pulses that would have traveled through the gargantuan World War II computer. Rather than simply emulating the computer’s internal machinations and presenting the user with a high-level representation, his goal was always to create an open source model that demonstrates how the machine really operated.

Those goals haven’t changed, but the project has now moved into a new phase. With the simulation code essentially complete, Brian is now focusing on recreating the experience of using the ENIAC itself. With a considerably reduced footprint, of course. This year, that included a 3D-printed model of the complete computer at 1/10th scale. He’s also created a 1/8th scale model of four ENIAC accumulators, complete with fully functional LED displays that approximate the original’s blinkenlights.

Make no mistake, Brian’s project was already exceptionally impressive in 2018. But the addition of the new physical components of his display clearly resonated with the attendees at this year’s VCF, as people gathered around to marvel at his meticulous recreation. The takeaway for some might be about the importance of visual aids on a crowded show floor, but I was just glad to see his phenomenal work was getting the attention it deserves.

Local on the 8s

Events like VCF are also an excellent opportunity to see hardware that previously you were only able to admire from afar. For me, that meant getting to see the WeatherSTAR 4000 that techknight lovingly brought back to life with easily some of the best reverse engineering work to ever grace the pages of Hackaday. The machine was joined by several examples of similar weather-reporting devices in a group exhibit called Smooth Jazz and Stormy Skies, and each one of them was a fascinating look at the state-of-the-art in multimedia technology for their respective eras.

One of the particularly interesting elements of this display was an Arduino-controlled FSK encoder that’s able to produce the time and data signals necessary to control at least some variants of the WeatherSTAR. The device was connected to a pair of stock WeatherSTAR Jrs — diminutive text-only terminals that would likely have been marketed towards smaller markets that wanted basic functionality without the bells and whistles of the larger units. As the device relies on some closed source back-end code, techknight says he’s not sure he’ll be able to release the project in full, but does plan on documenting it in the future for those who are interested in his continuing quest to bend these iconic devices to his will.

An Arduino-based FSK encoder for WeatherSTAR

At a nearby table I also came across the now legendary Cursed Mac, though to be honest, I didn’t actually recognize it at first. The extensively modified Macintosh SE was stripped of its distinctive blacked out enclosure for its appearance at VCF East, and instead was clad in an admittedly gorgeous transparent case.

Some mused whether such a drastic modification strips the Cursed Mac of its identity. After all, its amateurish paint job and the wildly contrasting colors of its optical and Zip drives are part of what earned it the moniker in the first place. But in the end, this is just the beginning of another chapter in the long and winding history of Theseus’ favorite computer.

As fascinating as the more targeted exhibits were, arguably the most exciting part of VCF is seeing the incredible array of computers and hardware on display each year. From one-of-a-kind devices to machines which were never meant to see the outside of a research laboratory, even the most knowledgeable and experienced retro-computer aficionado is guaranteed to see at least a few specimens that will be completely unknown to them.

This gallery shows some of the unique, rare, and downright beautiful pieces of vintage hardware that I saw during my time at VCF East, but is in no way an exhaustive record of what was on display.

Now normally this would be the part of the post where I would show you all of the incredible things I saw for sale at VCF. But to be perfectly honest, by the time I managed to get to the greatly expanded consignment area on Saturday afternoon, things were pretty well picked clean. Granted it was something of a revolving door, with people dropping off more car loads of oddities as the day went on; but from what I was able to gather from others, Friday morning was really where you wanted to be for the best deals and selection.

I still enjoyed looking through what was left, and a few pieces even managed to find their way into the trunk of my car, but my advice for anyone looking to get their hands on some particular piece of kit is be there when the doors open up on Friday if at all possible. Or better yet, keep an eye out for the next VCF Swap Meet.

While this year’s Vintage Computer Festival East was held in October, historically it happens in May, right before things start to heat up at the Jersey Shore. Obviously COVID-19 made that date unworkable for 2021, so the decision was made early on to push it out to the Fall. While the number of cases is still a bit higher in the Northeast than VCF organizers (or anyone, for that matter) had probably hoped for, the move certainly paid off. Masks were strongly encouraged, and there was quite a bit of hand sanitizer going around, but otherwise it was about as close to a pre-pandemic event as you could expect.

Assuming the worst of this thing is truly behind us now, and that the 2022 event doesn’t need to have its date pushed back, that means the next VCF East is only around seven months away. That’s great news for those of us who get to walk around and gawk at all the fascinating hardware on display, but it does put extra pressure on the hard working folks at the Vintage Computer Federation who make it all possible. Luckily, helping them out is as easy as spreading the word about the VCF, and of course, buying a ticket to one of their events.

We’ll certainly be there when the Vintage Computer Festival East comes back around to Wall, NJ in the Spring. Will you?

15 thoughts on “VCF East Roars Back To Life”