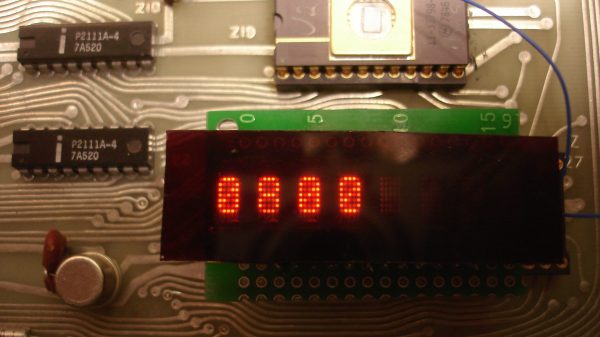 Sometimes, hacking is just for the pleasure of diving into the secrets of old hardware. That was very much the case when [glitch] and a friend started hacking on some old Intel 8080 boards that had been living in the junk pile for too long.

The boards in question were motherboards from Identicon barcode scanners, running the Intel 8080 CPU. Hacking on the 8080 is a little different, with the ancient CPU requiring three separate voltages to run. However, with the power rails figured out and power applied, it was possible to get the old boards up and running.

The boards were first run with test ROMs which showed the 8080 CPU to be functional. The ROMs hosted a simple program which got the 8080 to spit out the word “HELO” on to an HP HDSP-2416 ASCII character display. From there, the barcode scanner boards were installed in a chassis and hooked up to a bigger Siemens character display, and the memory was mapped out.

The result was that [glitch] and co were able to largely reverse engineer the Identicon hardware, learning it was fairly similar to the Intel MCS-80 reference design of the era. They were able to get code running on the platform, access the RAM, and fit a larger 8-character display. However, without the original barcode scanner attachment, the boards weren’t able to return to their original duty.

As far as hacks go, it’s pretty old school. The boards don’t talk to Twitter, nor run the lights or help with the dishes. However, plenty of fun was had seeing if this old metal could be made to follow instructions once more. Hacking for the pleasure of it is always a good thing by our book! 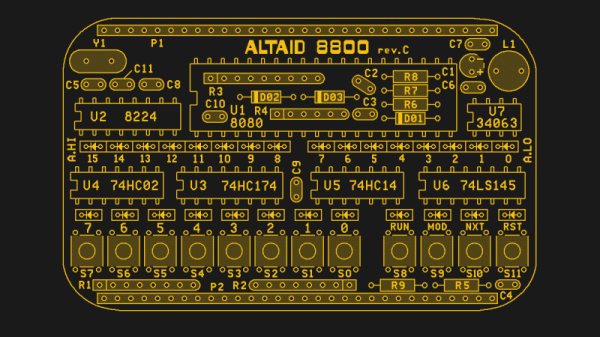 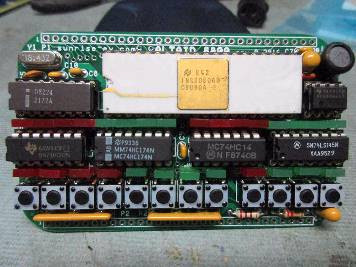 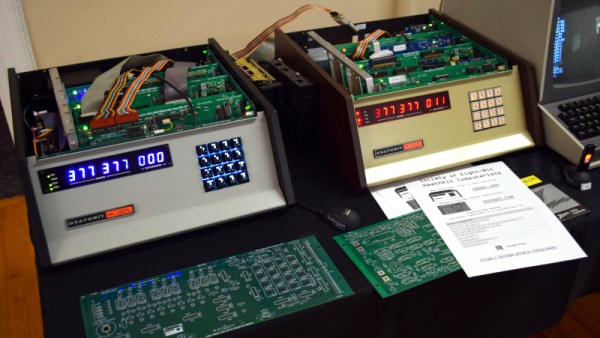 To say the Heathkit name is well known among Hackaday readers would be something of an understatement. Their legendary kits launched an untold number of electronics hobbies, and ultimately, plenty of careers. From relatively simple radio receivers to oscilloscopes and televisions, the company offered kits for every skill level from the post-war era all the way up to the 1990s.

So it’s hardly a surprise that in 1977, seeing the success of early home computers like the Altair 8800 and IMSAI 8080, Heathkit decided to join the fray with a computer kit of their own. But by that point the home computing market had started to shift from a hobbyist’s pursuit to something the whole family could enjoy. Compared to the Apple II and TRS-80, both of which also launched in 1977, Heathkit’s machine seemed like the product of a bygone era.

While it might not have gained the notoriety of the microcomputers it was designed to compete with, the Heathkit H8 is certainly not forgotten. Tucked away in a corner at the 2021 Vintage Computer Festival East was an impressive exhibit dedicated to the Society of Eight-Bit Heath Computerists (SEBHC) called Heathkit: Keeping the Legacy Alive. Presented by Glenn Roberts, this collection of original and modern hardware demonstrated the incredible lengths to which this group of passionate Heathkit owners have gone to not just preserve the memory of these often overlooked computers, but to continue to improve upon the kit’s unique design.

END_OF_DOCUMENT_TOKEN_TO_BE_REPLACED 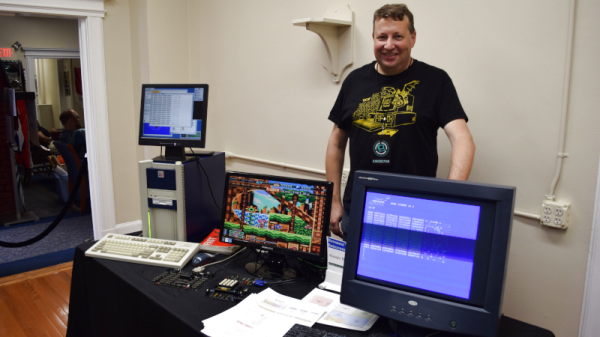 There was certainly no shortage of unique computers on display at the 2021 Vintage Computer Festival East; that’s sort of the point. But even with the InfoAge Science and History Museum packed to the rafters with weird and wonderful computing devices stretching back to the very beginning of the digital age, Alastair Hewitt’s Novasaur was still something of an oddity.

In fact, unless you knew what it was ahead of time, you might not even recognize it as a computer. Certainly not a contemporary one, anyway. There’s nothing inside its Polycase ZN-40 enclosure that looks like a modern CPU, a bank of RAM, or a storage device. Those experienced with vintage machines would likely recognize the tight rows of Advanced Schottky TTL chips as the makings of some sort of computer that predates the 8-bit microprocessor, but its single 200 mm x 125 mm (8 in x 5 in) board seems far too small when compared to the 1970s machines that would have utilized such technology. So what is it?

Inspired by projects such as the Gigatron, Alastair describes the Novasaur as a “full-featured personal computer” built using pre-1980 components. In his design, 22 individual ICs stand in for the computer’s CPU, and another 12 are responsible for a graphics subsystem that can push text and bitmapped images out over VGA at up to 416 x 240. It has 512 K RAM,  256 K ROM, and is able to emulate the Intel 8080 fast enough to run CP/M and even play some early 80s PC games.

END_OF_DOCUMENT_TOKEN_TO_BE_REPLACED 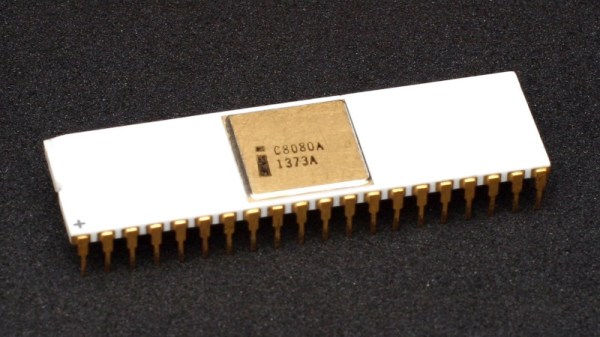 The early history of microprocessors is a surprisingly complex one, with more than one claimant for the prize of being the first, and multiple competing families. That the first commercially available part was the Intel 4004 is a matter of record, but it’s fair to say that few of us will have ever encountered one. Even its 8-bit sibling the 8008 would not have featured heavily in a 1974 version of Hackaday, such was its exotic nature. If there’s a microprocessor that can be claimed to have started it all for us then, it’s the Intel 8080. It established the 8-bit microporcessor with an 8-bit bus and a 16-bit address space, it had an order of maginitude more performance than its predecessors, and crucially it would become affordable enough for experimenters. It provided the guts of the MITS Altair 8800 microcomputer, and thus kickstarted the progression of home computers which led to the devices you use every day.

The 8080 is in our sights today, thanks to [DeviceGuru], who was sent down memory lane by thoughts of the 6502-based KIM-1 from his master’s thesis project. This led to memories of the 8080 Abie computer that he built for himself in 1979, for which he provides us some details and hand-drawn schematics. By then the 8080’s need for several support chips made it somewhat outdated, but from his perspective the chip could be had from Radio Shack without too much outlay. His tale of hand-assembling 8080 code and sending it to a friend for blowing onto a PROM might be familiar to some readers of a certain age.

Though the 8080 ceased volume production a quarter century ago (surprisingly there are still places you can get a new one though) it hasn’t entirely disappeared from our community’s consciousness. [DeviceGuru] tells us about the 8080 Microprocessor kit from [Wichit Sirichote] in Thailand which is a single board computer in the 1970s vein, hex keypad and all.

As you might expect, the 8080 hasn’t appeared in many projects here due to its rarity. Those that have seem more likely to feature its Eastern Bloc clones, such as this Polish model or this Russian one. It’s worth the reminder that if you fancy exploring some 8080 code of your own that you don’t even need an 8080 to run it on some silicon. The hugely popular Zilog Z80 as found in retrocomputers such as the RC2014 is fully mostly 8080 code compatible, indeed some of us learned about microprocessors that way because 8080 books were discounted in 1983 and Z80 ones weren’t. 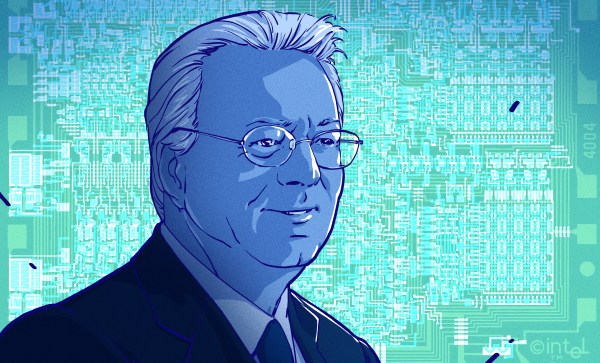