We like projects where old gear is given a new life. [Splashdust] has a twenty-year old business firewall that’s build like a tank. He cracks it open and finds a complete x86 embedded motherboard inside, and sets off to restore it and turn it into a retro gaming computer (see the video from his Odd & Obsolete YouTube channel below the break). 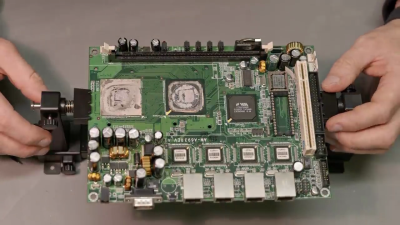 This business firewall and router box is from a small Swedish firm Clavister, part of their S-Series from the early 2000s. The motherboard appears to be a generic one used in other equipment, and is powered by a VIA Eden ESP 4000 running at 400 MHz. The Eden line of x86 processors were low-power chips targeting embedded applications. The graphics chip is a Twister T by S3 Graphics which was purchased by VIA in 2000. After replacing the electrolytic capacitors, and making a few cables, [Splashdust] pops in a PCI sound card and boots up into Windows 98 from a CF card (we like the compact PCB vise he uses).

In two follow-up videos (here and here), he builds an enclosure (instructions on Thingiverse) and tries out several other operating systems. He was able to get the Tiny Core Linux distribution running with the NetSurf browser, but failed to get Windows 2000 or XP to work. Returning to Windows 98, he tweaks drivers and settings and eventually has a respectable retro-gaming computer for his efforts. The next time you’re cleaning out your junk bins, have a peek inside those pizza-box gadgets first — you may find a similar gem.