Ultrasonic transducers are incredible, with them you can detect distances, as well as levitate and peer through objects. They can emit and receive ultrasonic soundwaves (typically above 18khz) and just like all waves, they can be steered via a phased array. [Bitluni] was trying to accurately measure distances but found the large field of view of the sensor was just too imprecise, so he made a phased array of transducers.

The inspiration came from a Hackaday Supercon talk from 2019 about phased arrays. [Bitluni] walks through an excellent explanation of how the array works with a bucket of water and his finger, as well as a separate simulation. By changing the phase offset of the different array members, the beam can effectively be steered as interference muffs the undesired waves. Using a set of solenoids, he created a test bench to validate his idea in a medium he could see; water. The solenoids fire a single pulse into the water creating a wave. You can see the wave move in the correct direction in the water, which validates the concept. A simple PCB sent off to a fab house with a stencil offers a surface to solder the transducers and drivers onto. An ESP32 drives the 8 PWM signals that go to the transmitters and reads in the single receiver via a small amplifier. Still not content to let the idea be unproven, he sets up the receiver on his CNC gantry and plots the signal strength at different points, yielding beautiful “heat maps.” 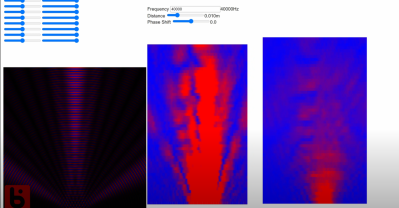 It sweeps a 60-degree field in front of it at around 1-3 frames per second. As you might imagine, turning sound wave reflections into distance fields is a somewhat noisy affair. He projects the sonar display on top of what we can see in the camera and it is fun to see the blobs line up in the correct spot.

We noticed he built quite a few boards, perhaps in the future, he will scale it up like this 100 transducer array? Video after the break.