The Sci-Fi Contest closed out on Monday, and we put our heads together and picked our favorites. And it was no easy task, because in addition to many of the projects simply looking stellar, many went all-out on the documentation as well, making these stellar examples that we can all learn from, whether you’re into sci-fi or not. But who are we kidding? From the responses we got, you are.

[RubenFixit]’s Star Trek Shuttle Console is a Trek themed escape room in a box. The project’s extraordinary attention to detail and exhaustive project logs absolutely won our judges heart. From the LCARS graphics to the 3D printed isolinear chip bays and mimetic crystals, it’s all there. [Ruben] estimates about 300 hours of work went into this one, and it shows.

We had no shortage of robotic projects in the contest, but [RudyAramayo]’s R.O.B. won our judges over. This one is not a joke, weighing in at over 140 lbs of custom metalwork and righteous treads. It’s also made out of some expensive hardware all around, so maybe this isn’t your weekend-build robot. We love the comment on the Arduino test code suite: “For gods sake man, you must test your code when it becomes an autonomous vehicle.”

Finally, [zapwizard]’s Functional Razor Crest Control Lever is a prop and a video game controller in one. We can totally see Grogu playing with this, and we were wowed by the attention to detail in the physical build — with custom gears and a speed limiter — as well as the attention to prop-making detail. Some parts are custom-cut stainless steel plates. 3D printed parts are covered in aluminum tape and chemically aged. Awesome. Oh yeah, it’s also a working USB joystick.

These three winners will be receiving a $150 shopping spree at Digi-Key.

Living in the Future

This year’s contest featured a number of real projects in Sci-Fi clothing, and that’s awesome. We don’t know what it says about the Hackaday audience, but far too many of the entries this year weren’t just props — there was a lot of real engineering going on. Maybe we are really living in the future.

In the never-ending fan battle between Star Wars and Star Trek: this round goes to the Wars. Half of the credit goes to [CuriousMarc] and his fantastic Mouse Droid and R2-D2 replicas, but if we had to have a sub-category just for The Mandalorian, we could have. [Kenneth Zaborny]’s Chopper droid has been around for years, and it still looks great! Star Wars fans just represented.

Stolen off the Set 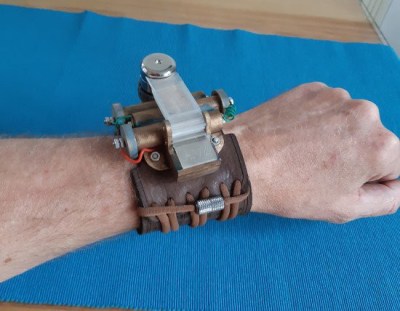 We love [Melissa Matos]’s Warehouse 13 Tesla Gun — it’s a polyphase ass-kicker. It’s got Nixies, a 3D printed frame, and a power knob that goes up to an understated four. [Legionlabs]’s Schrödinger’s Trigger isn’t the cleanest or the most refined, but it makes up for it with hacker-style grit, and for that it looks somehow realer. And [cyzoonic]’s Cyberdeck1, which we’ve covered before on Hackaday, still rocks. [Bram]’s RayTime watch is from another universe, and we love it.

This category had really only one contender, and [Andrea Piccinno]’s 3X0 is all-in. Starting with a 3D photogrammetry scan of himself, a lot of 3D printing, springs, and shock absorbers are heading in the direction of half man, half machine. This is a project to keep your eye on.

The Most Important Device

This category is for things that look like the future because they’re bright and blinky. [Luke J. Barker]’s C.O.R.A. from Battlestar Galactica fits the bill, while looking a lot like the real deal out of Starbuck’s ship. Why were LEDs that blink out FFTs a thing? It’s the future, baby! And although it doesn’t blink, we have to give a hat-tip to [Eddie]’s Kaleidoscope: it’s a bunch of RGB LEDs hand-soldered to fixed resistors, and the natural component tolerances makes for subtle, beautiful, lighting. It might look good in the background of a starship officer’s quarters.

In sum, we got a ton of awesome entries! Thanks to everyone who entered, and the rest of you definitely should check out all projects. There was a lot more going on than we could ever do justice to.