For much of the 19th and 20th century, the mining and use of asbestos saw near-constant growth, with virtually every material used in the construction of homes, offices, ships, road networks and industries featuring this miraculous mineral in some fashion. Some of these materials would contain only a few percent asbestos mineral as a binder, while others would be mostly or entirely composed out of asbestos.

What had begun as mostly a curiosity thousands of years prior was now turning into the material that was helping propel humanity into an era of hitherto unknown levels of prosperity and technological progress. It seemed as if the addition of even just a bit of asbestos would make houses weather- and fireproof, make concrete and asphalt nearly indestructible and add just that little bit of zing to tiling and interior decorations, as well as rigidity to the predecessor to today’s plastics: bakelite.

Being a fibrous material, asbestos would also be used everywhere for insulation purposes, as well as around boilers, steam pipes and everywhere else where the heat-retaining yet thermally stable properties were very useful. Yet we all know how this story went: by the 1970s it was clear that humanity had mostly unwittingly walked into a nightmare, where every house, every surface and basement was a potential death trap.

With a war in Ukraine razing entire cities to the ground, and Europe seeking to revitalize its asbestos-filled post-war housing stock in the face of an energy crisis, this risk is more real now than ever before. So how did we get here, and what can we do about it?

Early uses of asbestos have been found in the form of asbestos-ceramics. These are essentially pottery that mix clay and asbestos mineral in varying degrees. The high-asbestos (90%) products made this way would have been highly heat-resistant, which along with the other forms show evidence of having been used with metal work. Potentially this heat-resistant property would have been extremely useful during the iron and bronze ages.

In addition, the fibrous strands made it possible to make asbestos ware that was much lighter and stronger than comparable pure clay pottery. Later in history, the ancient Greek would call asbestos ‘amiantos’, which is also retained in modern Greek, French and other Latin languages. Because of an error made by the Roman naturalist Pliny the Elder in his Natural History manuscript, Germanic languages and English would end up with the Greek word for ‘lime’ (ἀσβεστος, i.e. asbestos), which refers to something entirely different.

With most of the usage of asbestos during this period limited to integration in ceramics and similar that limited exposure to the invisible asbestos fibers, it wasn’t until the 19th century with industrial-scale mining and usage of the mineral that its adverse effects would become undeniable. This despite reports during Roman times on some observed ill effects of handling asbestos by both Strabo and Pliny the Younger. Back then and in the 19th century the most obvious signs were generally found among workers who dealt with asbestos directly. Inspectors as early as 1898 noted the signs of asbestos-related diseases, yet no concerted action would be undertaken until the 1970s.

Widescale bans on the general usage of asbestos containing materials (ACM) and asbestos by itself would not be put in place until the 1990s and 2000s, with currently over sixty countries having done so. In many countries – including Russia, China and Kazakhstan – asbestos is still mined, exported to a large number of countries and used in a variety of materials. This includes construction material like asbestos cement (AC), which are still a common sight on buildings and sheds in the West as well.

Despite the clear dangers, even Canada – as one of the formerly largest asbestos exporters – has a ban in place only since 2018, and the US still only has a partial ban on asbestos. For example, only Washington state has made asbestos brake pads illegal, despite the known risks (1986 EPA video). This highlights the patchwork global approach to asbestos and the struggle to get it banned.

Considering that asbestos is a mineral that was assumed to be biochemically inert (Kuroda et al., 2008), what harm can it do to the human body? If we look at the asbestos mineral itself, we can see that it is a silicate mineral, with the main groups which we refer to as ‘asbestos’ found in the amphiboles as: 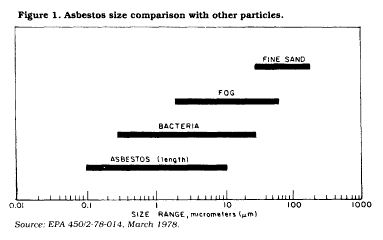 Within the serpentine subgroup we find chrysotile, which is commonly known as “white asbestos”. A characteristic of the serpentine asbestos is that it has a more curled shape to the fibers, whereas those in the amphiboles look more like jagged spikes. Of these asbestos minerals, chrysotile is most commonly used, followed by the so-called ‘blue’ and ‘brown’ amphiboles.

Despite their differences in outwards appearance, what they have in common is their effect on the body. Thanks to their small size and needle-like shape, the fibers can not merely enter the body via the airways, but will also readily remain stuck deep inside the lungs.

The below PSA video by the Workers’ Compensation Board of British Columbia (WorkSafeBC) visualizes the basic process of asbestos fiber inhalation:

Macrophages try to get rid of the fibers and ultimately fail to do so, which results in pulmonary fibrosis as part of a condition called asbestosis. Aside from symptoms such as shortness of breath due to the formation of scar tissue in the lungs, the increased stiffness and decreased diameter of blood vessels in the lungs means increased pressure to overcome for the heart’s right ventricle, leading to pulmonary hypertension. This often leads to heart failure.

In addition to the increased risk of lung cancer due to the localized inflammatory damage, asbestos fibers can also penetrate the lungs and reach the mesothelium, which is the tissue lining the chest wall and outside of the lungs and other organs. This is the most common cause (over 80%) of mesothelioma, which is a highly aggressive form of cancer with exceedingly poor 5-year survival prospects, even with treatment.

Because of the high correlation between mesothelioma and asbestos exposure, this type of cancer is used to gauge the full health impact of decades of asbestos exposure, as detailed in a recent paper by Furuya et al. (2018) in Environmental Research and Public Health.

An interestingly frightening aspect of asbestos fibers is that they do not necessarily need to be inhaled to cause ill effects. Despite the WHO’s drinking water guidelines not counting asbestos as a carcinogen when ingested, recent studies (Ciaula et al. (2016), Totaro et al. (2019)) provide evidence of mesothelioma cases being correlated with high levels of asbestos in the drinking water of Tuscany, Italy at 700,000 fibers/liter.

This is corroborated by Kjaerheim et al. (2005) who provided evidence of increased GI tract cancers among lighthouse keepers who drank water from asbestos cement water pipes. Since such asbestos cement water pipes are in use today in most nations with a 50 year – 70 year service life, this would seem to be a pertinent concern. What makes this issue so particularly hard to pin down is that the consequences of asbestos exposure can take decades to become apparent, such as with mesothelioma.

Since asbestos containing materials are essentially everywhere, and asbestos can be literally scooped off the ground in some regions (e.g. Metsovo, Greece), what can we do about it? For the ACMs at least, we have as guideline that any building material from before an asbestos ban went in place likely contains asbestos. There are also many image galleries that give helpful guidance as to what to look for, such as at the UK Health and Safety Executive gallery, and their accompanying asbestos survey guide with a detailed overview of the many types of ACMs.

In brief, these ACMs include:

Even such innocuous materials as drywall (plasterboard) are likely to contain asbestos in addition to the gypsum, and both bricks and mortar are likely to contain asbestos. Over the past decades, glass wool and mineral wool have taken the place of asbestos for most insulation and fiber-reinforcement applications, along with fiberglass fabric products like Zetex. To the naked eye, however, it is hard to impossible to positively distinguish ACMs from asbestos-free materials. To this day, the only reliable way to identify ACMs is to take samples and put each one under an electron microscope to see what the fibers in the sample look like.

During the process of asbestos abatement, ACM is carefully removed, using negative air pressure zones, water or similar to prevent dust, PPE (full-face respirators and protective clothing) and HEPA filters as needed to prevent the release of fibers into the environment or endanger the workers. The exact scope of the ACM removal will depend on the preceding survey results, with materials that are at risk of releasing fibers at the top of the disposal list, while ACMs that are fully contained in the material (like resins) generally left in place unless the goal is full demolition of a structure.

While most of this ACM waste is generally deposited in special landfills that aim to contain leaking of asbestos into the surrounding environment, there’s the possibility of neutralizing the asbestos fibers through thermal treatment at 1000 °C – 1250 °C (Gualtieri et al. (2000)), or microwave thermal treatment (Leonelli et al., 2005), though neither approach seems to have found much traction so far. Only one company in the UK (Thermal Recycling) seems to be an active player in this market.

It’s conceivable that the sheer amount of ACM to be disposed of would make thermal disposal impractical, but this is something nations will have to consider as the need to dispose of increasing amounts of such waste keeps building. For nations like Ukraine that are faced with countless Soviet-era buildings pulverized through the violence of war, identification and safe disposal of any ACM is a very daunting task, made worse through the urgent need to rebuild people’s homes.

In other nations that have phased out new construction with asbestos, but are dealing with standing houses filled literally up to the attic with asbestos, there is every risk of asbestos exposure in the process of upgrading heating systems, installing PV solar panels replacing windows and adding insulation. What is astoundingly clear is that this is not a health risk that will go away by itself, even if the cost of exposure today will not become clear until a few decades from now.

96 thoughts on “Asbestos: The Miracle Mineral Of Our Worst Nightmares”