The end of the year is often a time for people to exchange presents and — of course — the rich want to buy each other the best presents. The Neiman Marcus company was famous for having a catalog of gift ideas. Many were what you’d consider normal gifts, but there were usually extreme ones, like a tank trunk filled with 100,000 gallons of cologne. One year, the strange gift was an authentic Chinese junk complete with sails and teak decks. They apparently sold three at $11,500 (in 1962 money, no less). Over the top? In 1969, they featured a kitchen computer.

Wait a minute! In 1969, computers were the purview of big companies, universities, and NASA, right? Well, not really. By that time, some industrial minicomputers were not millions of dollars but were still many thousands of dollars. The price in the catalog for the kitchen computer was $10,600. That’s about $86,000 in today’s money. The actual machine was a Honeywell 316, based on one of the computers that helped run the early Internet. 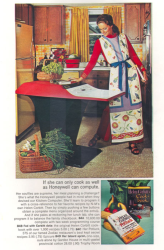 It isn’t entirely clear if the company really thought they would sell one and — as far as anyone can tell — they didn’t. The machine came with a two-week training class to learn how to program the machine and with no real screen, we aren’t entirely clear how it worked. According to Earlycomputers.com:

The computer used binary code, so if Mom wanted to plan a dinner around some nice steak that she had just bought, she would need to enter the binary code for steak:

And even if she managed to do that correctly, the output from the computer was displayed as a series of lights that “spelled out” the answer in binary code. Imagine eight small lights in a row and if they were on it would be read as a “1” and if it were off it would be read as a “0”. There is mention of a teletype machine that had a typewriter keyboard and would make the interface easier but that doesn’t seem to be included in price of the computer.

Best guess? We think you keyed in some recipe ID number and how many servings you wanted. Then the computer would give you codes for each ingredient and the quantity: 1/4 cup per serving times 6 servings would somehow tell you 1 1/2 cups.

Hardware-wise, the over-100-pound machine used 16-bit words and had 72 instructions. The machine has 4 KB of magnetic core expandable to 16 KB and ran at a respectable 2.5 MHz. There isn’t much information about the actual machine, although plenty can be found about the actual H316. But you could tell it was a kitchen computer. Why? Because it included a built-in cutting board, something a stock H316 probably couldn’t claim. You can see the only known version that lives at the Computer History Museum in the video below.

A Solution in Search of

It is hard to remember, but in those days and all the way up until sometime in the 1980s, we all predicted that computers would be in people’s homes. We just couldn’t agree on what they were going to do. Tracking recipes was a common suggestion. So was balancing a checkbook, something few people seem to do anymore. Programs like Visicalc and Wordstar sold businesses on computers, but the real killer application for people wound up being communicating with other people and businesses via the network. Sure, gaming, digital photography, digital video, and digital music also became popular, but remember that it has been fairly recently that personal computers have had the storage and horsepower to do a good job at many of those things.

Even today, though, most people don’t have a permanent computer in the kitchen for cooking. Sure, there are probably a few microcontrollers in your appliances. You might use a tablet, a phone, or a laptop to look up a recipe. But the idea of a recipe computer never really caught on.

Let’s face it, early computers didn’t look like they do now, even if they were personal. Ditto for what used to pass for a laptop.