We feature a lot of clocks here at Hackaday, but alarm clocks seem to be less popular for some reason. Maybe that’s because no-one enjoys being woken up in the morning, or simply because everyone uses their smartphone for that purpose already. In any case, we’re delighted to bring you [Manuel Tosone]’s beautiful Nixie tube alarm clock that cleverly combines modern and classic technologies in a single package. 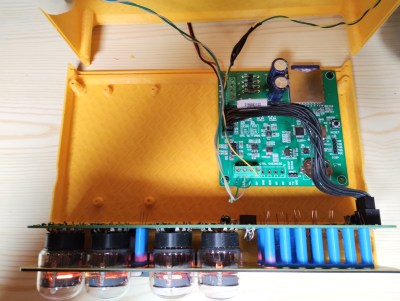 The clock and alarm functionalities are implemented by a PIC24 microcontroller on a custom mainboard. It keeps track of time through its real-time clock with battery backup, and plays a song from an SD card when it’s time to wake up. A 2 x 3 W class D audio amplifier plus a pair of stereo speakers should be able to wake even the heaviest sleepers.

Of course, the real party piece is the clock’s display: four IN-4 Nixie tubes show the time, with neon tubes indicating the day of the week. The 180 V needed for the Nixies is generated by an MC34063A-based boost converter, which also powers the neon tubes.

Instead of using the standard current-limiting resistor for each Nixie tube, [Manuel] designed an array of transistor-based current sources: this enables linear control of the tubes’ brightness, and should keep the amount of light constant even as the tubes age. The individual segments are switched by SN75468 Darlington arrays, with no need for those hard-to-find SN74141 drivers.

The mainboard and the display are housed inside a 3D-printed case that mimics the style of 1980s digital alarm clocks, but with a nice 1970s twist courtesy of those Nixie tubes. [Manuel]’s GitHub page has all the schematics as well as extensive documentation describing the circuit’s operation — an excellent resource if you’re planning to build a Nixie project yourself. If Nixies aren’t your thing, you can also make an alarm clock with a VFD tube, or even roll your own luminous analog dial.