But thanks to the rtl_433_ESP Arduino library developed by [NorthernMan54], we’re now able to pack that functionality into a much smaller package. All you need is an ESP32 microcontroller and a CC1101 or SX127X transceiver module. If you’re looking for a turn-key hardware platform, the documentation notes the LILYGO LoRa32 V2 board includes the required hardware, plus adds a handy OLED display and microSD slot. It should be noted that the range of these radios don’t compare particularly well to a full-size RTL-SDR device, but that probably won’t come as much of a surprise. 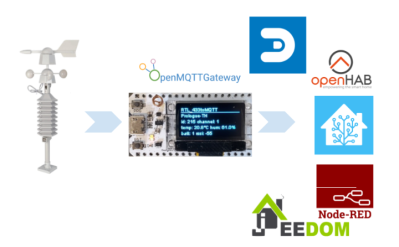 The library ports a large chunk of the rtl_433 project’s code over to the smaller and less powerful platform, which [NorthernMan54] has helpfully documented by listing the source files which were brought over verbatim as well as the ones that needed some extra attention.

As you might expect, some concessions had to be made in the effort: assuming the documentation is up-to-date, the rtl_433_ESP library can decode less than half of the devices supported by rtl_433 proper. But again, considering the vast differences in capability between the hardware the project was originally designed for and a microcontroller that costs a few bucks, it’s hard to complain.

We were tipped off to this project by [1technophile], who tells us he’s integrated the rtl_433_ESP library into his OpenMQTTGateway project. This gives the microcontroller the ability to scoop up data from wireless sensors from all over the home and publish the resulting data via MQTT so it can be picked up by Home Assistant, OpenHAB, or whatever automation package you’ve got running. It’s a trick we’ve seen done before with an RTL-SDR dongle and a computer, but being able to accomplish the same task on a smaller and more energy efficient platform certainly sounds like progress to us.