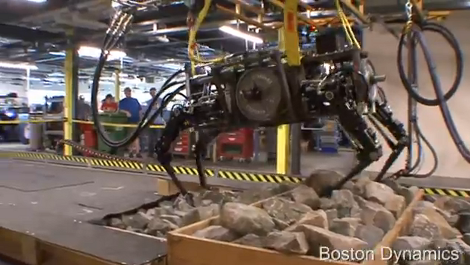 Those following the evolution of quadrupedal assist robots will recognize the specimen seen above as a relative of BigDog. This is AlphaDog, one of the latest prototypes in Boston Dynamics’ Legged Squadron Support Systems program. It’s designed to carry 400 pounds of payload, which explains the disc weights seen on either side of the torso. Like its diminutive sibling, LittleDog, it’s able to take on all kinds of terrain. Here it’s being tested with boxes full of rocks.

The robot is capable of picking itself up and getting under way again without intervention. The first video after the break shows test footage where the robot starts nearly upside-down and has no trouble righting itself again. When we looked in on a biped version back in 2009 we also linked to the BigDog prototype which showed developers trying to tip it over mid stride. This version has the same balance resiliency.

Also embedded after the break is a video showing the evolution of the design over about seven years of development.