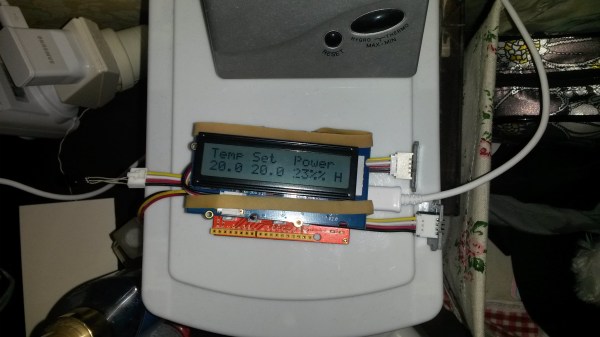 They have an electric oil radiator which works well, but isn’t very smart. It only has 6 settings — not very useful when you’re trying to stay at a certain temperature. First off, they looked into a plug-in thermostat controller, and found a cheap one called the HeaterMate. Unfortunately it left a lot to be desired. For example, it didn’t seem to have PID control at all — and for an oil radiator, when you turn it off… it’s still going to heat the room for a while. He also found that because of the high current load of a heater … the device would read a few degrees over room temperature when operating. Unperturbed, [George] took this opportunity to design and build his own PID thermostat controller instead.  END_OF_DOCUMENT_TOKEN_TO_BE_REPLACED