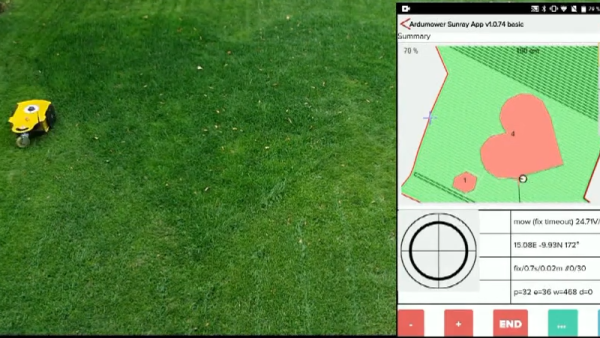 The rise of open source hardware has seen a wide variety of laborious tasks become successfully automated, saving us humans a great deal of hassle.  Suffice to say, some chores are easier to automate than others. Take the classic case of a harmless autonomous vacuum cleaner that can be pretty dumb, bumping around the place to detect the perimeter as it traverses the room blindly with a pre-programmed sweeping pattern.

Now in principle, this idea could be extended to mowing your lawn. But would you really want a high speed rotating blade running rampant as it aimlessly ventures outside the perimeter of your lawn? The Sunray update to the Ardumower autonomous lawn mower project has solved this problem without invoking the need to lay down an actual perimeter wire. As standard consumer grade GPS is simply not accurate enough, so the solution involves implementing your very own RTK-GPS hardware and an accompanying base station, introducing centimeter-level accuracy to your mowing jobs.

RTK-GPS, also known as Carrier Phase Enhanced GPS, improves the accuracy of standard GPS by measuring the error in the signal using a reference receiver whose position is known accurately. This information is then relayed to the Ardumower board over a radio link, so that it could tweak its position accordingly. Do you need the ability to carve emojis into your lawn? No. But you could have it anyway. If that’s not enough to kick off the autonomous lawnmower revolution, we don’t know what is.