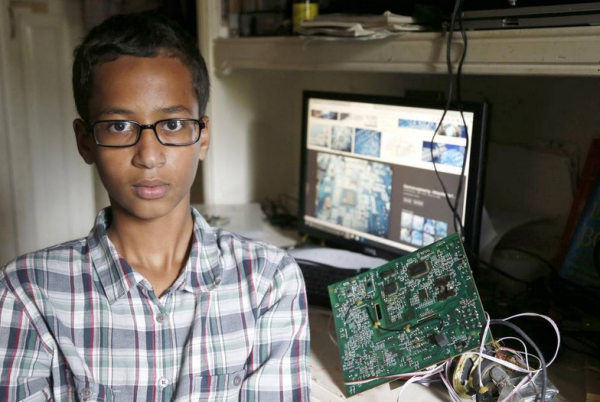 A 14-year-old in Dallas, Texas has been arrested for bringing a clock to his school. [Ahmed Mohamed] could be any one of us. He’s a tinkerer, pulling apart scrap appliances and building projects from the parts. He was a member of the his middle school robotics team. The clock was built from a standard four digit seven segment display and a circuit board. [Ahmed] built the circuit inside a Vaultz hard pencil case like this one. He then did what every other experimenter, inventor, hacker, or maker before him has done: He showed off his creation.

Unfortunately for [Ahmed] one of his teachers immediately leapt to the conclusion that this electronic project was a “hoax bomb” of some sort. The police were called, [Ahmed] was pulled out of class and arrested. He was then brought to a detention center where he and his possessions were searched. [Ahmed] is now serving a three-day suspension from school. His clock is considered evidence to be used in a possible criminal case against him.

If this situation doesn’t get your blood boiling, then we don’t know what does. Not only is there a glaring racial issue here, but also an issue of allowing kids to bring their projects to school. We hope you’ll join us in expressing outrage at this whole debacle, as well as supporting [Ahmed] in any way you can. Let’s join together as a community to make sure a few small-minded individuals don’t break the spirit of this budding hardware hacker.

For anyone out there who would like to support [Ahmed]’s education even when his school won’t, [Anil Dash] is will be in contact with the family later today. We’re offering a gift card for the hackaday store and we would assume other contributions would also be welcome. -Ed.