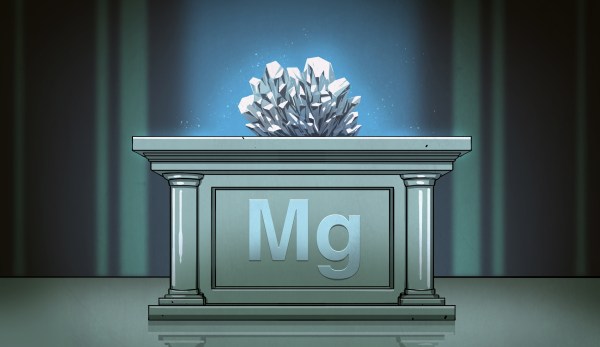 Okay, we’re not running out. We actually have tons of the stuff. But there is a global supply chain crisis. Most of the world’s magnesium is processed in China and several months ago, they just… stopped. In an effort to hit energy consumption quotas, the government of the city of Yulin (where most of the country’s magnesium production takes place) ordered 70% of the smelters to shut down entirely, and the remainder to slash their output by 50%. So, while magnesium remains one of the most abundant elements on the planet, we’re readily running out of processed metal that we can use in manufacturing.

But, how do we actually use magnesium in manufacturing anyway? Well, some things are just made from it. It can be mixed with other elements to be made into strong, lightweight alloys that are readily machined and cast. These alloys make up all manner of stuff from race car wheels to camera bodies (and the chassis of the laptop I’m typing this article on). These more direct uses aside, there’s another, larger draw for magnesium that isn’t immediately apparent: aluminum production.

But wait, aluminum, like magnesium is an element. So why would we need magnesium to make it? Rest assured, there’s no alchemy involved- just alloying. Much like magnesium, aluminum is rarely used in its raw form — it’s mixed with other elements to give it desirable properties such as high strength, ductility, toughness, etc. And, as you may have already guessed, most of these alloys require magnesium. Now we’re beginning to paint a larger, scarier picture (and we just missed Halloween!) — a disruption to the world’s aluminum supply.