A little over two years ago we posted an amazing contraption that holds a stack of paper sheets, folds them into paper planes, and launches them. There’s now a newer version — the PFM A5 v2.0. It is over a meter long, weighs about 10 kilograms, and features a mind-boggling number of gears and moving parts. Video is embedded below.

In one end travels one sheet of paper after the next. At each stage in the process the paper is folded (symmetrically) and creased by a vertical wheel to make up the keel of the finished plane before launching out the other end. Amazing, and not a jam or “PC Load Letter” error message in sight!

This, of course, has a purpose… junk ads from the sky!

END_OF_DOCUMENT_TOKEN_TO_BE_REPLACED 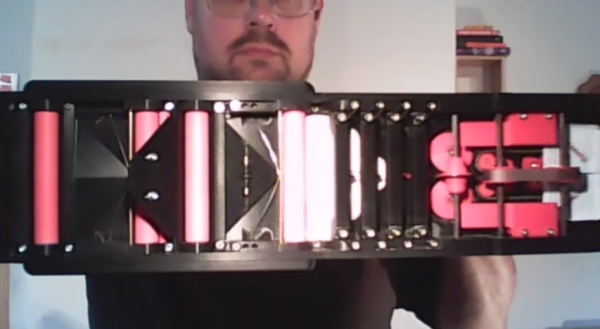 A German man has just finished a very impressive Paper Airplane Machine Gun, or a Papierflieger-Maschinenpistole, which just sounds so much cooler. It actually takes a stack of paper, folds it into paper air planes and shoots them.

The device takes a stack of what looks like post-card size paper in the “clip”, forms them into paper air planes by a series of rollers and folding edges and then launches them out of the end. A cheap electric screwdriver powers the entire drive train, which allows him to shoot around 20 planes per minute (PPM?).

Sadly there’s really not too much information on how it works, nor the files to reproduce it. [Papierfliegerei], as he goes by on YouTube, decided to build this awesome contraption to show off just what 3D printers are capable of these days. He designed the whole thing in 3D CAD and had many of the parts printed off at a 3D printing company called fabberhouse.de, while the rest of the components are off the shelf.