Old American radios (and we mean really old ones) took several kinds of batteries. The A battery powered the filaments (generally 1.5V at a high current draw). The B battery powered the plate (much lower current, but a higher voltage–typically 90V). In Britain these were the LT (low tension) and HT (high tension) batteries. If you want to rebuild and operate old radios, you have to come up with a way to generate that B voltage.

Most people opt to use an AC supply. You can daisy-chain a bunch of 9V batteries, but that really ruins the asthetics of the radio. [VA3NGC] had a better idea: he built a reproduction B battery from a wooden box, some brass hardware, a nixie tube power supply, and a 9V battery (which remains hidden). There’s also a handful of zener diodes, resistors, and capacitors to allow different taps depending on the voltage required. 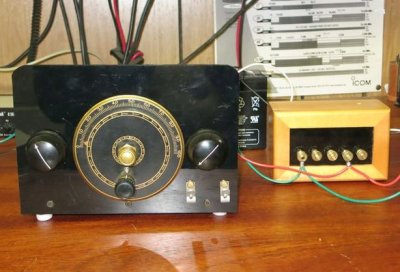 The project looks great. The wooden box apparently was a recycle item and the brass hardware makes it look like it belongs with the old radios it powers. This is a good example of how there’s more to vintage restoration than just the electronics. Sure, the function is important, but to really enjoy the old gear, the presentation is important, too.

Not all tube radios took 90V B+, but since this battery has taps, that isn’t a problem. The old Radio Shack P-Box kit took 22.5V. Of course, if you are going to build your own battery, maybe you ought to build your own triodes, too.

Depending on who you believe, yesterday someone either broke an NDA or was the lucky recipient of an Element 14 shipping error. Nevertheless, we were lucky enough to get a glimpse at the new Raspberry Pi Model B+. Today, everything is live, and Adafruit has a great teardown of what’s new, what’s changed, and what’s completely different in this new board.

The biggest question about this new Pi was the CPU: the Broadcom SoC in the models A and B are looking a little long in the tooth right now, and an upgraded CPU would be a very, very welcome addition. There is no change. This is the same 700 MHz Broadcom chip with 512MB of RAM. There will not be a ‘magical, because you’re awesome’ RAM upgrade the original Model B saw early in production, either – there simply aren’t enough address pins in the SoC.

Despite not having an upgraded CPU, there are some neat features that addressed the complaints of the original Pi: The standard sized SD card socket is replaced with a microSD card socket that won’t stick out over the edge of the board. The ports are rearranged, with the analog video out on a TRRS plug with the audio. There are now four USB ports and an Ethernet port thanks to this chip, and mounting holes galore: they’re M2.5 holes in a square 58mm wide and 49mm high. Also included in the B+ is a completely redesigned power supply – the jumbo linear regulator is gone, replaced with an all-around better power supply.

The biggest change for anyone looking making a project with the Pi is the expanded GPIO header. This is a 40 pin header, with the ‘top’ pins identical to the original 26 pin header. Yes, all your existing Pi plates/shields/whatevers will still work. The new pins on this header include nine more GPIO pins, the I2S pins for the Wolfson audio card, and a pair of pins for an ID EEPROM. Connections to an ID EEPROM have been a feature of the BeagleBone for a while now, and this will allow the Pi to configure the appropriate I/Os and kernel modules at boot, depending on what Pi Plates are attached.

The best part about this is the price – it’s the same as the OG Model B. Using the same case as you old Model A or B is out of the question, but that’s totally what Kickstarter is for, right? You might want to grab one of those, because this is probably going to be the form factor for the upgraded Raspberry Pi 2.0 that will probably be released in a year or two.