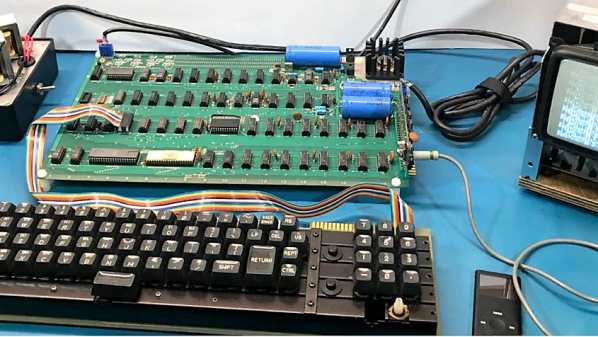 If you think Apple products are overpriced now, wait until they’re 50 years old.

This original Apple I recently sold at auction for $375,000, making it one of the most expensive 6502-based computers in history. Given that only something like 60 or 70 of the machines are known to exist, most built by hand by [Jobs] and [Wozniak], it’s understandable how collectors fought for the right to run the price up from the minimum starting bid of $50,000. And this one was particularly collectible. According to the prospectus, this machine had few owners, the most recent of whom stated that he attended a meeting of the legendary Homebrew Computer Club to see what all the fuss was. He bought it second-hand from a coworker for $300, fiddled with it a bit, and stashed it in a closet. A few years later, after the Apple ][ became a huge phenomenon, he tried to sell the machine to [Woz] for $10,000. [Woz] didn’t bite, and as a result, the owner realized a 125,000% return on his original investment, before inflation.

The machine was restored before hitting the auction block, although details of what was done were not shared. But it couldn’t have been much since none of the previous owners had even used the prototyping area that was so thoughtfully provided on the top edge of the board. It was sold with period-correct peripherals including a somewhat janky black-and-white security monitor, an original cassette tape interface, and a homebrew power supply. Sadly, there’s no word who bought the machine – it was an anonymous purchase.

Hackers, check your scrap bins. Anything hanging out there that might be worth six figures in a few decades? It’s unlikely, but if you get lucky, hacking just might turn into your retirement plan.

Thanks to [my wife] for the tip on this one.