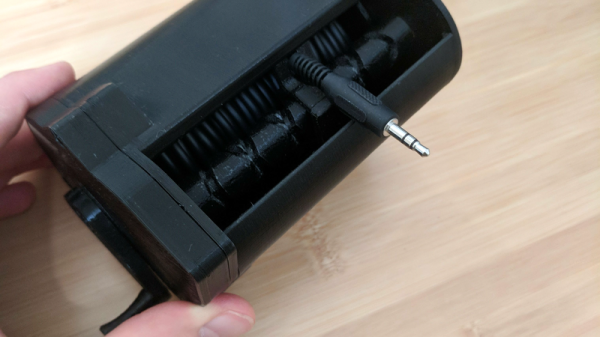 Long cables are only neat once – before they’re first unwrapped. Once that little cable tie is taken off, a cable is more likely to end up rats-nested than neatly coiled.

Preventing that is the idea behind this 3D-printed cable reel. The cable that [Kevin Balke] wants to make easier to deal with is a 50 foot (15 meters) long Vive lighthouse sync cable. That seems a bit much to us, but it makes sense to separate the lighthouses as much as possible and mount them up high enough for the VR system to work properly.

[Kevin] put a good deal of effort into making this cable reel, which looks a little like an oversize baitcasting-style fishing reel. The cable spool turns on a crank that also runs a 5:1 reduction geartrain powering a shaft with a deep, shallow-pitch crossback thread. An idler runs in the thread and works back and forth across the spool, laying up the incoming cable neatly. [Kevin] reports that the reciprocating mechanism was the hardest bit to print, as surface finish affected the mechanism’s operation as much as the geometry of the mating parts. The video below shows it working smoothly; we wonder how much this could be scaled up for tidying up larger cables and hoses.

This is another great entry in our 3D Printed Gears, Pulleys, and Cams Contest. The contest runs through February 19th, so there’s still plenty of time to get your entries in. Check out [Kevin]’s entry along with all the others, and see what you can come up with.