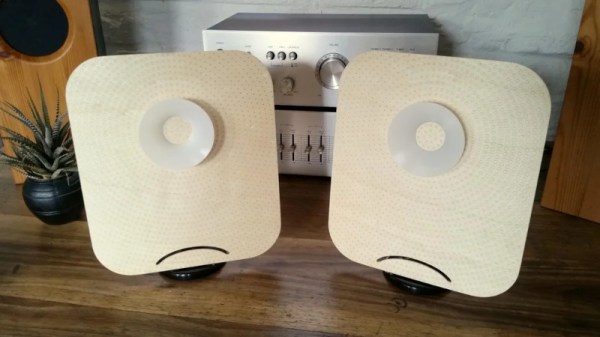 Distributed-mode loudspeakers work rather differently from the typical drivers used in 99% of applications. Instead of using piston-like motion to create sound waves, they instead rely on exciting an entire panel to vibrate and thus produce sound. [JGJMatt] decided to build a pair of bookshelf-sized units, with great results.

The build begins with a pair of 44mm DML exciters, readily available online. These had to be modified to remove their stock metal mounting plates that degraded the sound output in early tests. Instead, 3D printed pieces were used to mount the exciters to the 3mm plywood boards, which were lasercut to act as the main DML panels. Additionally, whizzer cones were fitted to the panels in an effort to further boost the high frequency response of the speakers. The speaker stands are assembled out of more 3D printed pieces and aluminium rods, giving a clean, modern look to the final product.

The performance of the speakers is admirable based on the test video, though [JGJMatt] notes that they should be paired with a subwoofer in use as the DML units do not readily produce frequencies below 100Hz. We’ve seen similar builds before on a larger scale, too. Video after the break.