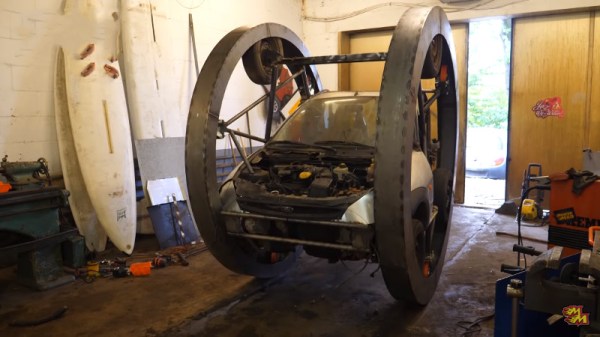 If you’ve been to the right events, you’ve seen them before – the cars with an external cage that let the car complete a somersault in the forward direction under heavy braking. They’re impressive, but it’s possible to take things even further. Enter [mastermilo82] and the RollKa.

The RollKa follows on from the RollGolf, which was a straightforward roll car build. Built around a Ford Ka, it eschews the external cage for a more radical design. The Ka has been shortened, and designed to fit within two enormous steel rims which wrap around each side of the car. Additional idler wheels have been welded to the Ka’s roof to enable it to effectively roll within the outer steel rims.

It’s a rather eccentric design, known as a diwheel. We’ve seen impressive electric versions before, but at least at this stage, this project appears to lack any advanced control systems and gets by on sheer luck and welding prowess. The build is still at an early stage, with episode three starting some early movement tests under power. It’s a testament to what can be achieved with a spacious garage and some imagination, and we can’t wait to see what happens next! Video after the break.

END_OF_DOCUMENT_TOKEN_TO_BE_REPLACED