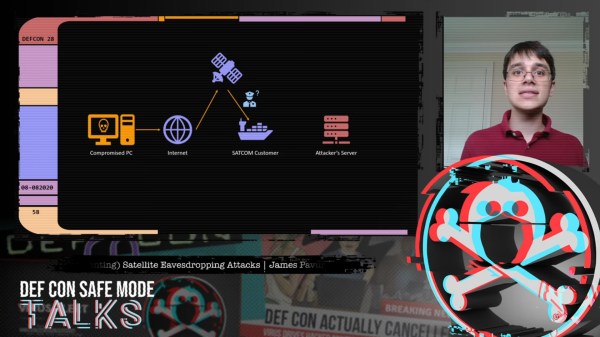 Geosynchronous satellites, girdling the Earth from their perches 36,000 km above the equator, are remarkably useful devices. Depending on where they’re parked, they command views of perhaps a third of the globe at a time, making them perfect communications relays. But as [James Pavur] points out in his DEF CON Safe Mode talk, “Whispers Among the Stars”, geosynchronous satellite communication links are often far from secure.

[James], a D. Phil. student in Systems Security at Oxford University, relates that his exploits rely on the wide areas covered by the downlink signals from the satellites, coupled with security as an afterthought, if it was even thought of at all by satellite service providers. This lackadaisical approach let him use little more than a regular digital satellite TV dish and a tuner card for a PC — off-the-shelf stuff that you’d really have to try hard to spend more than $300 on — to tap into sensitive information.

While decoding the digital signals from satellites into something parseable can be done with commercial applications, [James] and his colleagues built a custom tool, GSExtract, to pull data from the often noisy signals coming down from on high. The setup returned an amazing bounty of information, like maritime operators relaying the passport information of crew members from ship to shore, point-of-sale terminal information from cruise ships in the Mediterranean, and in-flight entertainment systems in jet airliners. The last example proved particularly alarming, as it revealed an exploitable connection between the systems dedicated to keeping passengers content and those in the cockpit, which clearly should not be the case.

We found [James’] insights on these weaknesses in satellite communications fascinating, and it’s well worth the 45 minutes to watch the video below and perhaps try these exploits, which amount to side-channel attacks, for yourself.