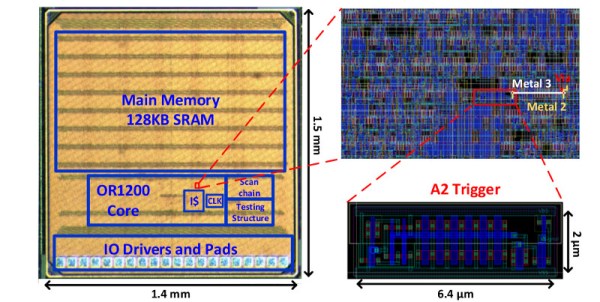 We will all be used to malicious software, computers and operating systems compromised by viruses, worms, or Trojans. It has become a fact of life, and a whole industry of virus checking software exists to help users defend against it.

Underlying our concerns about malicious software is an assumption that the hardware is inviolate, the computer itself can not be inherently compromised. It’s a false one though, as it is perfectly possible for a processor or other integrated circuit to have a malicious function included in its fabrication. You might think that such functions would not be included by a reputable chip manufacturer, and you’d be right. Unfortunately though because the high cost of chip fabrication means that the semiconductor industry is a web of third-party fabrication houses, there are many opportunities during which extra components can be inserted before the chips are manufactured. University of Michigan researchers have produced a paper on the subject (PDF) detailing a particularly clever attack on a processor that minimizes the number of components required through clever use of a FET gate in a capacitive charge pump.

On-chip backdoors have to be physically stealthy, difficult to trigger accidentally, and easy to trigger by those in the know. Their designers will find a line that changes logic state rarely, and enact a counter on it such that when they trigger it to change state a certain number of times that would never happen accidentally, the exploit is triggered. In the past these counters have been traditional logic circuitry, an effective approach but one that leaves a significant footprint of extra components on the chip for which space must be found, and which can become obvious when the chip is inspected through a microscope.

The University of Michigan backdoor is not a counter but an analog charge pump. Every time its input is toggled, a small amount of charge is stored on the capacitor formed by the gate of a transistor, and eventually its voltage reaches a logic level such that an attack circuit can be triggered. They attached it to the divide-by-zero flag line of an OR1200 open-source processor, from which they could easily trigger it by repeatedly dividing by zero. The beauty of this circuit is both that it uses very few components so can hide more easily, and that the charge leaks away with time so it can not persist in a state likely to be accidentally triggered.

The best hardware hacks are those that are simple, novel, and push a device into doing something it would not otherwise have done. This one has all that, for which we take our hats off to the Michigan team.

If this subject interests you, you might like to take a look at a previous Hackaday Prize finalist: ChipWhisperer.

[Thanks to our colleague Jack via Wired]