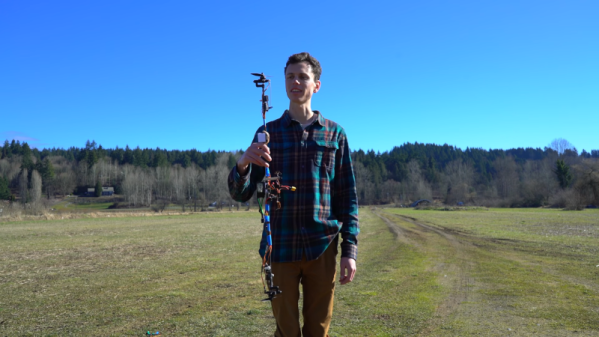 Fixed-wing planes and helicopters are no longer the darling of the RC world. Even quadcopters and other multirotors are starting to look old hat, as the community looks to ever more outrageous designs. [rctestflight] has slimmed things down to the extreme with this coaxial bicopter build, also known as the Flying Stick (Youtube video, embedded below).

The initial design consists of two brushless outrunner motors fitted with props, rotating in opposite directions to cancel out their respective torques. Each is mounted on a gimbal, setup to provide control authority. iNav is used as a flight controller, chosen due to its versatile motor mixing settings. The craft was built to test its ability at recovery from freefall, as a follow-on from earlier attempts at building a brushless “rocket” craft.

Performance is surprisingly good for what is fundamentally two props on a stick. Initial tests didn’t quite manage a successful recovery, but the repaired single-gimbal version almost achieves the feat. Multirotors in general struggle with freefall recovery, so more research in this area is definitely worthwhile. Video after the break.