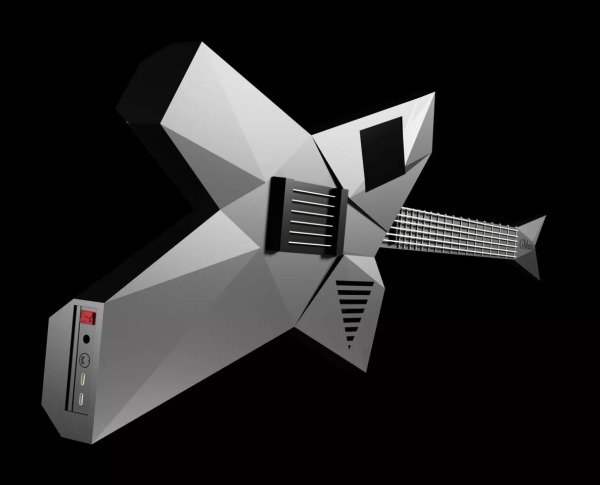 Playing the guitar is pretty difficult to do, physically speaking. It requires a lot of force with the fretting hand to produce clear notes, and that means pressing a thin piece of metal against a block of wood until the nerve endings in your fingertips die off and you grow calluses that yearn to be toughened even further. Even if you do get to this point of being broken in, it takes dexterity in both hands to actually make music. Honestly, the guitar is kind of an unwelcoming instrument, even if you don’t have any physical disabilities. 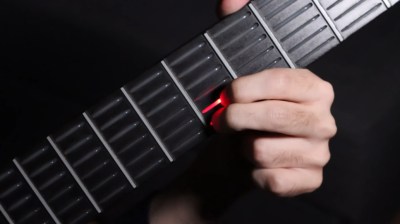 A Russian startup company called Noli Music wants to change all of that. They’re building a guitar that’s playable for everyone, regardless of physical or musical ability. Noli Music was founded by [Denis Goncharov] who has a form of muscular dystrophy. [Denis] has always wanted to rock out to his favorite songs, but struggles to play a standard guitar.

If you can touch the fretboard, it seems, you can whale away on this axe without trouble. It’s made to be easier to play all around. The strings aren’t fully tensioned, so they’re easy to pluck — the site says they only take 1.7oz of force to actuate.

Right now, the guitar is in the prototype stage. But when it’s ready to rock, it will do so a couple of ways. One uses embedded sensors in the fretboard detect finger positions and sound the appropriate note whether you pluck it or simply fret it. In another mode, the finger positions light up to help you learn new songs. The guitar will have a touchscreen interface, and Noli are planning on building a companion app to provide interactive lessons.

We have to wonder just how exactly this will be able to mimic the physics of guitar playing, especially since it’s designed with all players in mind. How satisfied will seasoned players be with this instrument? Can it do pull-offs and hammer-ons? What about slides? Do the sensors respond to bends? And most importantly, will the built-in speaker be loud enough to drown out the string vibrations? It seems to do just fine on that front, as you can see in the video below.

If the built-in speaker didn’t drown out the strings, it could make for some interesting sounds that stray outside the western chromatic scale, much like this LEGO microtonal guitar.

END_OF_DOCUMENT_TOKEN_TO_BE_REPLACED

Only 80s kids will remember actual hair metal with the meedley-mees way up high on the fret board, and in the 80s, fret boards got longer. Twenty one or twenty two frets on a guitar weren’t good enough, and you needed the full two octaves of twenty four frets. As with anything, more is better, so [Said Too Much] decided to add frets to his guitar. Yes, you can do that, and it actually doesn’t sound too bad, all things considering.

A few things to cover before going over this build. This did not start out as an experiment to extend the fretboard of a guitar. This started out as a soprano guitar build; this would be the inverse of a baritone guitar — instead of an extended scale length and heavier strings to play a fourth or fifth below a regular guitar, this soprano guitar would have a shorter scale length and lighter gauge strings to play a fourth or fifth above a regular guitar. After a few calculations and some calls to companies that make very, very thin guitar strings, this project morphed into a 3/4 scale guitar (a 23″ scale length, although I question that scale length being actually 3/4 scale) and a set of strings that used 0.07″ strings.

Since a soprano guitar is pretty much just like a normal guitar with more frets, this project also got an extended, 3D printed fretboard. Why? Because. The stock pick guard was modeled and printed out in PLA, removing the neck and middle pickups. Then, an ‘extended fret board adapter’ of sorts was slotted in behind the strings. This gives the guitar 38 frets, a full third of them being printed in PLA.

The burning question: does a 3D printed fret board work? Yes, kind of. If you can get your fingers in between the frets, you can absolutely play the 36th fret on this guitar. It’s not for everybody, obviously, and PLA printed frets will never be as good as polished metal frets. But it is an interesting experimental technique for stringed instruments we haven’t seen before. Check out the video below.