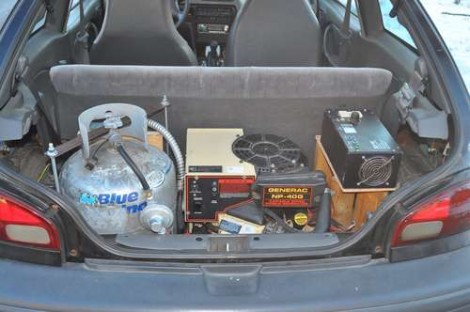 [Ben Nelson] turned his electric Geo Metro into a plug-in hybrid. But wait, where’d he get an electric Geo Metro? It seems that we’re one hack behind [Ben], who converted the vehicle to all electric back in 2008 using a forklift motor and some batteries. This time around he’s following the Chevrolet Volt’s example by adding a backup generator. Instead of going with a gasoline power he added a tank of propane and the generator from a Recreational Vehicle. This won’t put out enough juice to drive while the generator is running, but you can use it to extend your traveling range by pulling over for a nap while it tops off the batteries.