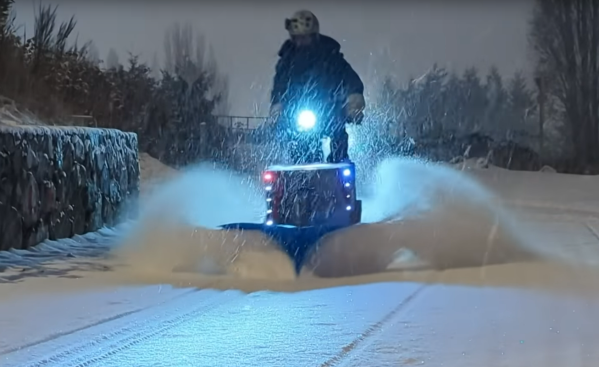 There are few challenges more difficult or dangerous than trying to get around the majority of North American cities by bicycle. Not only is the bicycle infrastructure woefully inadequate for safe travel (if it exists at all), but it’s often not maintained to any reasonable standard, either. This goes double in colder areas, where bike paths can essentially become abandoned in the winter after a snowfall. [Phil] found himself in this situation recently after a snowfall in western Canada and decided to DIY his own bike-powered snowplow to help keep his bike paths cleared.

The plow is built around an electric-assisted cargo bicycle, which is almost as rare in North America as bicycle infrastructure itself, but is uniquely suited to snowplow duty. It has a long wheelbase and a large front cargo area that can be weighed down if needed to ensure the plow makes good contact with the ground. The plow itself is built out of sections of plastic 55-gallon drums, which have been cut into two scooping sections and attached to the bike with a wooden 2×4 frame. The plow can be raised or lowered with a ratchet strap mechanism, and the plastic scoop skips over bumps in the path with relative ease.

With this relatively simple mechanism attached to his bike, [Phil] can make sure the trails that he frequents around Vancouver are more suitable for bike travel in the winter. Riding a bicycle through the winter, even in the coldest of climates, is not that difficult with the right support and investment in infrastructure, and this build is the best DIY solution we’ve seen to bicycle infrastructure support outside of adopting something like this remote-controlled snowblower to the job.

END_OF_DOCUMENT_TOKEN_TO_BE_REPLACED 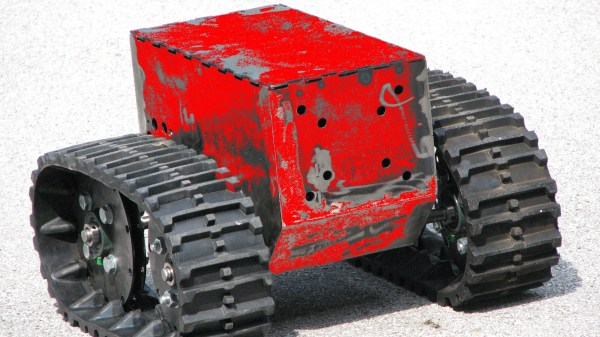 Don’t let the knee-high size of [Hrastovc]’s creation fool you. TrackRobot weighs in at a monstrous 60 kg (130 lbs) of steel, motors, and battery. It sports two 48V motors in a body and frame made from pieces of finger-jointed sheet steel, and can reach speeds of up to four meters per second with a runtime of up to an hour. The project’s link has more pictures as well as DXF files of the pieces used for the body.

Currently TrackRobot is remote-controlled, but one goal is to turn it into a semi-autonomous snow plow. You can see TrackRobot going through its first steps as well as testing out a plow prototype in the videos embedded below.

END_OF_DOCUMENT_TOKEN_TO_BE_REPLACED What do you get when you combine two bikes, a couple levers, and a home made wooden shovel? Why, a light duty tricycle plow, of course! [Craig] of Firefly Workshop cobbled together this contraption to assist him in shoveling his 90′ driveway when a few inches fall. More convenient than a normal shovel, and much more environmentally friendly than his 8 Horsepower snow blower, this trike looks like it could actually make shoveling the snow fun. Not really much more here than meets the eye, we just wish we had a video to share of this sweet ride in action.