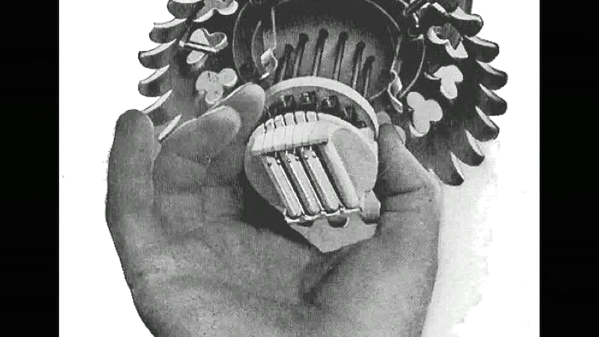 After dominating the illumination market for more than a century, it’s easy to think of the glowing filament of the standard incandescent lamp as the only way people found to turn electricity into light. But plenty of fertile minds turned out alternative designs, one of which is the fascinating Nernst lamp, which we’d previously never heard of.

If the name sounds familiar, it’s likely through exposure to [Walther Nernst]’s equation for electrochemistry, or for his “New Heat Theorem” which eventually became the Third Law of Thermodynamics. Pal of [Einstein] and eventual Nobel laureate, [Nernst] was also a bit of a tinkerer, and he came up with a design for an incandescent lamp in 1897 that was twice as efficient as carbon-filament lamps. The video below, from the Edison Tech Center, details the design, which used a ceramic “glower rod” that would incandesce when current flowed through it. The glower, though, was not conductive until it was quite hot, so separate heater coils that gave the glower a start on the process were included; these were switched off by a relay built into the base of the lamp once the glower started conducting.

It’s a complicated design, but its efficiency, coupled with a better light spectrum and the fact that it didn’t need a vacuum bulb since the glower wouldn’t oxidize like a carbon or tungsten filament, gave it certain advantages that let it stake out a decent share of the early market for electric illumination. It was even the light source for one of the first facsimile machines. We find it a very clever use of what were at the time exotic materials, and wonder if this could have lead to something like vacuum tubes without the vacuum.