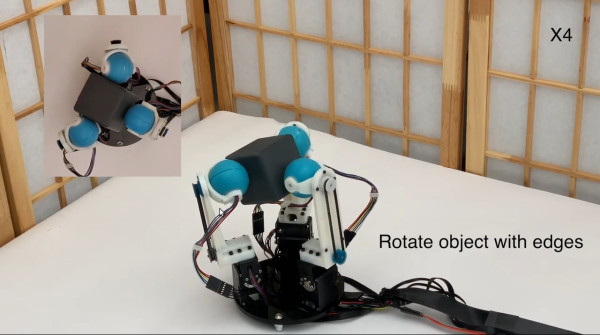 A lot of great scientific breakthroughs come through imitating nature, but technology often runs up against limits in certain areas. This is particularly evident in robotics, where it takes a lot of effort (and cost) to build a robot which can effectively manipulate heavy objects but not crush others which are more delicate. For that, a research group has looked outside of nature, developing a robotic grasper which uses omnidirectional wheels to grab various objects.

The robot hand is composed of three articulating fingers with fingertips which are able to actively manipulate the object that the hand is holding. With static fingertips, it is difficult to manipulate an object in the hand itself, but with the active surfaces at the fingertips it becomes easier to rotate the object without setting it down first or dropping it.

The project is much more than designing the robot hand itself, too. The robot uses calculated kinematics to manipulate the objects as well, but a second mode was also tried where the robot was able to “learn” how to handle the object it was given. The video linked below shows both modes in operation, with interesting results. If you prefer more biologically-inspired robot arms, though, there are always novel designs based on non-humans.

END_OF_DOCUMENT_TOKEN_TO_BE_REPLACED