The Hack42 Hackerspace in Arnhem, Netherlands is one of the best hackerspaces we’ve ever seen. After taking over a decommissioned military base, the Hack42 crew has filled a compound rimmed with razor wire with eclectic gizmos, tools, and a community that keeps growing the space. At this year’s EMF camp, Hack42 member [jos] laid out his plan to found the ultimate Hackerspace. He’s going to put a hackerspace in prison to create the ultimate hacker village, a monument to technomancy, and an anti-panopticon panopticon.

[jos] recently noticed a very large, very old prison — currently used to house refugees — went up for sale. This prison, located in downtown Arnhem, Netherlands is a panopticon, a concept for prisons popularized in the 1800s, with most designs based on a circular structure with prison cells  around the circumference and a guard house in the center. This gigantic building is 55 meters (180 feet) in diameter, and 46 meters (150 feet) tall at its highest point. This gigantic prison dome could contain the White House inside its walls, a few blue whales, and could almost fit a space shuttle stack under the dome (the orbiter itself would fit just fine if there were a door).

The ambitious vision for this prison-come-hackerspace is a permanent venue not unlike other hackercamps where hackers can stay for weeks or months to build a project, a venue for like-minded people to meet up, and a place for students to do graduation projects under the wings of academic leadership. A community is one thing, but this former prison would also be the largest hackerspace by enclosed volume, opening it up to some very cool, very large builds. Inter-office quadcopter mail was mentioned in the talk.

[jos] is looking for comments, ideas, and remarks via this Google form to, “convince the money-people to fork over the funds.” If you’ve ever wanted to contribute to something big, this is your chance. 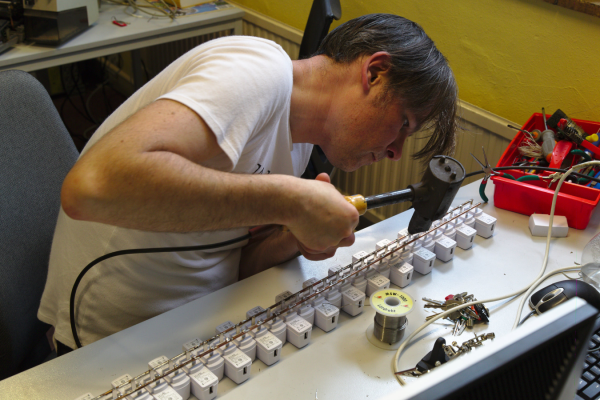 Like it or not, Hackers gonna hack. And when your hackerspace has someone who looks like Doc Brown from Back to the Future, the builds can get a bit weird, like this Hack42 FestivalCharger.

The Hack42 hackerspace in Arnhem, The Netherlands had collected a large number of TP-Link 5V USB chargers – but all of them had the North American NEMA plug (flat, 2 pin) which wouldn’t fit the Schuko sockets prevalent in The Netherlands. [Simon “MacSimski” Claessen] decided to whip out his giant soldering iron and use it to solder two long pieces of welding filler metal rods to 33 of the chargers, effectively wiring them up in parallel. He did apply his obvious skill and experience to good use. For one, the diameter of the filler metal rods he used were just about the right size to fit in the Schuko socket. And the gap between the two turned out to be the right distance too, thus creating a sort of Schuko plug. All that was needed to power up all the chargers was to connect a socket extension to the FestivalCharger. The unit was built to allow crowds of festival-goers to charge their phones and battery-powered gadgets simultaneously. To make sure the visitors didn’t get electrocuted, he used a piece of PVC pipe to cover up the exposed pins and keep it all safe.

Thanks to Hack42 member [Dennis van Zuijlekom] for sending in this tip. That 3-letter word does not even begin to describe the awesomeness that is Hack42. Located in a decommissioned German military base in Arnhem, Hack42 is one of the largest, and as far as we’ve seen, the most awesome hackerspace yet.