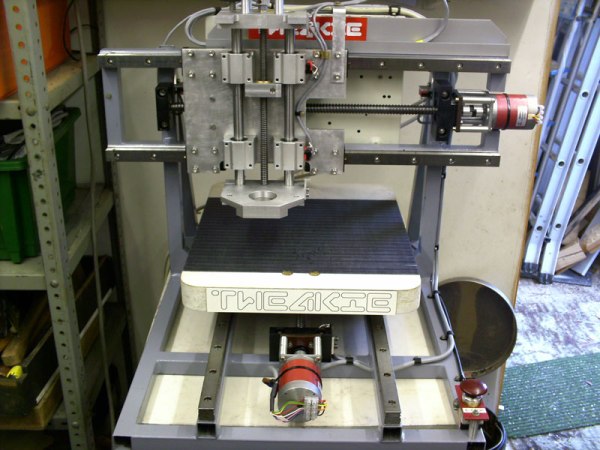 [Cooperman] had been poking around the ‘net checking out DIY CNC machines for a while. He wanted to build one. During his search, he noticed that there was a common thread amongst homemade machines; they were usually made from parts that were on hand or easily obtainable. He had some parts kicking around and decided to hop on the band wagon and build a CNC Router. What sets [Cooperman]’s project apart from the rest is that he apparently had some really nice components available in his parts bin. The machine is nicknamed ‘Tweakie‘ because it will never really be finished, there’s always something to tweak to make it better.

The foundation for Tweakie is a welded frame made from 25mm steel square tubing. A keen observer may point out that welding a frame may cause some distortion and warping. [Cooperman] thought of that too so he attached aluminum spacers to the steel frame and lapped them flat. After that, fully supported THK linear bearings were attached to the now-straight spacer surface. Both the X and Y axes have ball-screws to minimize backlash and are powered by NEMA23 stepper motors. The Z axis uses 16mm un-supported rods with pillow block linear bearings. Unlike the X and Y, the Z axis uses a trapezoidal lead screw and bronze nut. [Cooperman] plans on replacing this with a ball-screw in the future but didn’t have one on hand at the time of assembly.

Mach3 is the software being used to control the CNC Router. It communicates via parallel port with a 3-axis StepMaster motor driver board that can handle providing 24vdc to the stepper motors. All of the electronics are mounted neatly in an electrical cabinet mounted on the back of the machine. Overall, this is a super sturdy and accurate machine build. [Cooperman] has successfully cut wood, plastic and even aluminum! 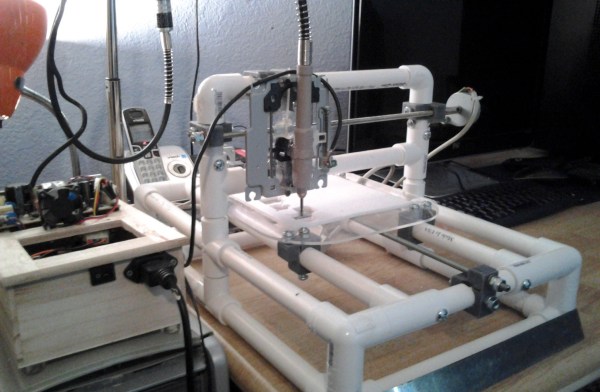 Here’s a rather unorthodox home-made CNC machine we haven’t seen before!

[ModHappy] recently accepted a challenge to design and build a CNC machine out of cheap and readily available components from a hardware store.

Wandering around the store he noticed the plumbing isle and he started playing around with PVC pipes on the floor, greatly confusing the store employees. He had a frame constructed, but still needed a way to achieve linear movement. His calls were answered in the electrical isle, where he made use of conduit wall-mounts! They only required a minor modification to go from gripping the pipe, to sliding along it. A few fasteners later, some stepper motors from a broken scanner, a CD-ROM drive for the z-axis, some hacked together couplers using set screws, and the mechanical build was complete.

On the controls end, he made use of a cheap Chinese TB6560 CNC driver board off eBay, which he modified slightly to increase reliability. The whole thing runs off LinuxCNC (which is free) on his old laptop — good to note, it can also be run live if you aren’t yet enlightened with a Linux OS.

Stick around after the break to see it in action, drawing out an awesome site’s logo!