[nullpointr] wanted a backlit keyboard for his Asus Transformer Prime so that it would be a bit easier to use in low-light situations. He considered a few different options and ended up adding electroluminescent panels behind the keys.

Those paying close attention might wonder why we called this a laptop in the title. Well, it’s a tablet with a keyboard dock and that’s a mouthful. This actually really helps to simplify the modifications because the motherboard and other bits are all in the screen portion of the device. EL panels are also a nice choice because you can cut them to size and they still function. With a bit of case work, three panels were made to fit side-by-side.

The part that just isn’t going to make it in the original enclosure is the inverter that drives the panels. It’s the black box to the left. [nullpointr] added a USB-form-factor jack to the side of the case that allows the inverter to be disconnected quite easily. This way the Transformer Prime can still go with him on the road, it just won’t light up unless he also hauls around that add-on.

Way way back we saw someone do this with fiber optics and an LED. Unfortunately that project link seems to be dead so we figure it’s about time someone revisited the concept.

The C pre-processor can help you write more concise, easy to follow code. It can also let you create a tangled ball of macros and #defines. [s1axter] wrote up a guide on how to use the pre-processor and keep your sanity.

We’ve seen some neat hacks with the C pre-processor, such as a full adder implementation, but this focuses on more practical usages. First, [s1axter] explains what the pre-processor does with your code by writing simple macros. Next up is arguments, and usage of ‘##’ directive for metaprogramming. Finally, we get a good explanation of why you need to worry about scope when using macros, and how to safe code by using ‘do {} while()’ statements.

If you’re into embedded programming, this guide will help you understand some of the more complex pre-processor techniques out there. It’s helpful for making your code clearer, and abstracting away hardware dependencies in a few lines of code. 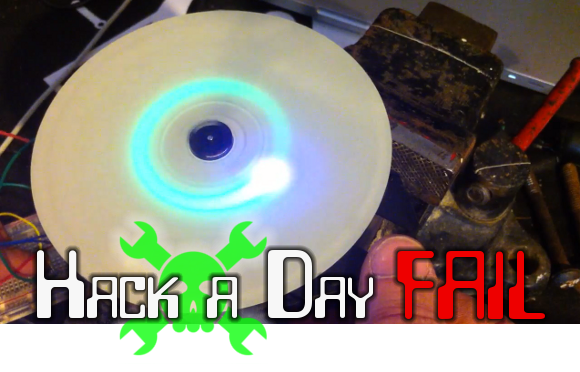 END_OF_DOCUMENT_TOKEN_TO_BE_REPLACED

[Jeremy] refused to settle on your typical alcohol storage options, and instead created the Boozeshelf. Like most furniture hacks, the Boozeshelf began as a basic IKEA product, which [Jeremy] modified by cutting strips of wood to serve as wine glass holders and affixing the front end of a wine rack at the base to store bottles.

In its standard operating mode the Boozeshelf lies dark and dormant. Approaching it triggers a cleverly recessed ultrasonic sensor that gently illuminates some LEDs, revealing the shelf’s contents. When you walk away, then lights fade out. An Arduino Mega running [Jeremy’s] custom LEDFader library drives the RGB LED strips, which he wired with some power MOSFETS to handle current demands.

[Jeremy] didn’t stop there, however, adding an additional IR receiver that allows him to select from three different RGB LED color modes: simple crossfading, individual shelf colors (saved to the on-board EEPROM), or the festive favorite: “Dance Party Mode.” Stick around after the break to see [Jeremy] in full aficionado attire demonstrating his Boozeshelf in a couple of videos. Considering blackouts are a likely result of enjoying this hack, we recommend these LED ice cubes for your safety.

END_OF_DOCUMENT_TOKEN_TO_BE_REPLACED Tuesday was [Ada Lovelace] day and to recognize it SparkFun posted an article about women in their workforce and the STEM initiative. [Ada Lovelace] is credited with forging a path for women in mathematics and computing. The STEM acronym represents a movement to get more of America’s students into Science, Technology, Engineering, and Mathematics fields in order to keep up with the rest of the developed world. But part of the issue includes drastically increasing the interest of young women in these fields and their access to it. The thing is, I feel the same way about the community at Hackaday.

Obviously some of the biggest names in the hobby electronics and engineering enthusiast industry are women. The name that seems to top lists is always [Limor Fried] who you may know better as [Lady Ada]. She founded Adafruit industries. But there are couple of other notables that stick out in our minds. [Jeri Ellsworth] has been huge name around here forever. Just this week Hackaday was celebrating the Kickstarter for her latest project. [Becky Stern] has had a ton of awesome project featured, mostly in conjunction with her work at Adafruit but her knitting machine hack when she was with MAKE has always stuck out in our minds. And of course, there’s [Quinn Dunki] who has long been building her own 6502 computer from the ground up (Incidentally we’re running a Guest Rant from her at midday on Friday).

What I’m missing is the grass-roots hacks from women. I know they’re out there because I see them at monthly meetings at the local hackerspace. We featured [Caroline’s] bathymetric book, and [Robin]’s collaboration that produced solar powered supercap jewelry. Both are members of Sector67.

So I call for all Hackaday readers to make this a friendly environment for anyone who wants to participate. If you’re a female reader who has been lurking around rather than sending in links to your gnarly hacks please take the plunge and send us a tip! If your female friends have awesome projects, offer to help them document it for a feature. You may not have thought of it, but sharing your projects makes you a role model for young readers.

By trade I’m an orchestra musician — a field that was completely closed off to women until well into the last century. While gender equality hasn’t been reached in all orchestras, the Regional Orchestras I have and do play with, show equal representation of gender throughout. Let’s make the same thing happen with STEM!