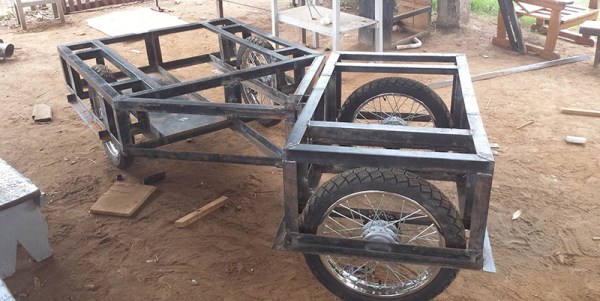 [Chris] lives in South Sudan, where there are a lot of poor areas with terrible infrastructure. One of the bigger challenges for this area is getting people and materials over roads that are either bad or don’t exist. Normal vehicles aren’t built for the task, and a Hilux or Land Cruiser is much to expensive. For his Hackaday Prize entry, [Chris] is building a rugged low-cost utility vehicle platform for the developing world.

This battery-powered, four-wheel cart is made out of what [Chris] could find. The frame is made out of 50x50mm angle iron that’s welded together, with the body panels fabricated out of 1200x2400x1.2mm sheet that’s sourced locally. While [Chris] would like better wheels, the cheap Chinese motorcycle wheels are everywhere and cheap – $65, which includes the bearings, breaks, and sprockets. It even has higher ground clearance than the Land Cruiser.

[Chris] already has a prototype of his project built and it’s rolling around. You can check out a video of that below.

END_OF_DOCUMENT_TOKEN_TO_BE_REPLACED

Hackaday Prize Worldwide is coming to Shenzhen, China at the end of next week! There’s lots to do, join us for as much of it as you can: 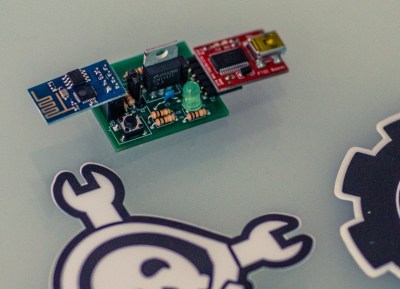 RSVP now for our Zero to Product workshop on Friday, June 19th. This is created and presented by [Matt Berggren] who shares his experience designing and laying out printed circuit boards professionally. A basic knowledge of electronics is all you need to get going and to lay out the dev board shown here! 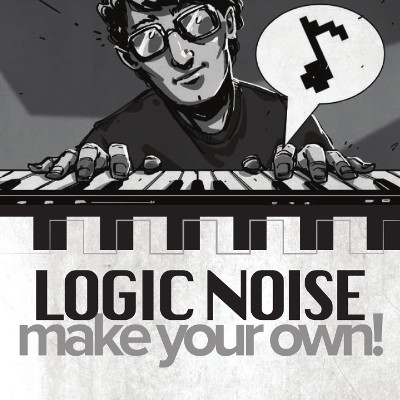 Holding down an awesome booth at Maker Faire all day makes us weary. We’ll recharge our batteries on Saturday, June 20th starting at 7pm. Join us at Bionic Brew (please be kind and tell us you’re coming). As always, when we hang out we like to see, and show off, hacks. Bring something along if it’s easy to store in a pocket or backpack.

Build some Logic Noise at our SZMF Booth

Yep, we already mentioned it… we’ll be camped out at Shenzhen Maker Faire teaching people how to make music with logic chips. We’ve based the activity off of [Elliot Williams’] fantastic Logic Noise Series. Stop by, say hello and grab some stickers!

I’ve said over and over again that Apple’s MagSafe port is the greatest advancement in laptop tech in the last 15 years. Those charger connectors break, though, so how do you fix it? With Lego, of course (Google translatrix). Use a light-colored 1×4 brick so the LED will shine through.

Want to learn Git commands? Here’s a great game that does just that. It’s a really well-designed game/tutorial that walks you through basic Git commands.

Lets say you’re just slightly paranoid about the Bad Guys™ getting into your computer with 0-days and roller blades. You’d like to connect this computer to the Internet, but you don’t want to leave it connected all the time. The solution? A timer for an Ethernet switch. It’s actually a better solution than doing the same thing with scripts: there’s a real, physical interface, and if the Bad Guys™ get in when you are connected, they could just enable the network adapter anyway. An extremely niche use case, but that’s 99% of the security hacks we see.

The DaVinci 3D printer is an okay printer if you’re cool with the Gilette model. The filament cartridges are chipped, and the software is proprietary. These problems have been solved, and now you can use a standard RepRap heated bed and glass with the DaVinci. At this point, people are buying the DaVinci just to tear it apart.

[Cliff] is pushing VGA video out of a microcontroller at 800×600 resolution and 60 frames per second. This microcontroller has no video hardware. Before we get to the technical overview, here’s the very impressive demo.

The microcontroller in question is the STM32F4, a fairly powerful ARM that we’ve seen a lot of use in some pretty interesting applications. We’ve seen 800×600 VGA on the STM32F4 before, with a circles and text demo and the Bitbox console. [Cliff]’s build is much more capable, though; he’s running 800×600 @ 60FPS with an underclocked CPU and most (90%) of the microcontroller’s resources free.

This isn’t just a demo, though; [Cliff] is writing up a complete tutorial for generating VGA on this chip. It begins with an introduction to pushing pixels, and soon he’ll have a walkthrough on timing and his rasterization framework.

Just because [Cliff] has gone through the trouble of putting together these tutorials doesn’t mean you can’t pull out an STM Discovery board and make your own microcontroller video hacks. [Cliff] has an entire library of for graphics to allow others to build snazzy video apps.

[Diederich] is running a Raspberry Pi loaded up with Pimatic, a great home automation server that does just about anything you can throw at it. One thing it doesn’t do is monitor electricity and gas directly from the meter – you’re going to need hardware for that. [Diederich] stepped up to the plate and built that hardware using just a 555 timer. The total cost of adding this to his Pimatic setup was less than a dollar.

The 555 can be used as a timer, a trigger, and a bunch of them can be cobbled together into a CPU. [Diederich] isn’t using some fancy logic here; he’s just using the 555 as a Schmitt trigger with a phototransistor and his electricity meter. The output of the 555 is connected to the GPIO of the Raspberry Pi, and a Python script ties into Pimatic.

It’s a neat solution that only costs a dollar, and using the 555 has a few advantages: the 555 makes it possible to use long and thin wires back to the Pi, which means [Diederich]’s Pi doesn’t have to be located right next to his meter.