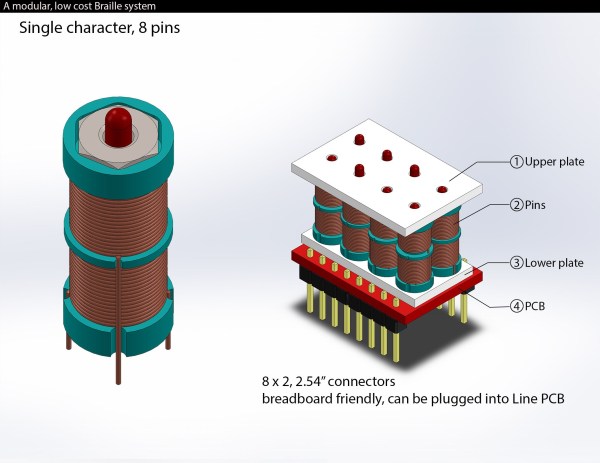 A lot of work with binary arithmetic was pioneered in the mid-1800s. Boolean algebra was developed by George Boole, but a less obvious binary invention was created at this time: the Braille writing system. Using a system of raised dots (essentially 1s and 0s), visually impaired people have been able to read using their sense of touch. In the modern age of fast information, however, it’s a little more difficult. A number of people have been working on refreshable Braille displays, including [Madaeon] who has created a modular refreshable Braille display.

The idea is to recreate the Braille cell with a set of tiny solenoids. The cell is a set of dots, each of which can be raised or lowered in a particular arrangement to represent a letter or other symbol. With a set of solenoids, this can be accomplished rather rapidly. [Madaeon] has already prototyped these miniscule controllable dots using the latest 3D printing and laser cutting methods and is about ready to put together his first full Braille character.

While this isn’t quite ready for a full-scale display yet, the fundamentals look like a solid foundation for building one. This is all hot on the heels of perhaps the most civilized patent disagreement in history regarding a Braille display that’s similar. Hopefully all the discussion and hacking of Braille displays will bring the cost down enough that anyone who needs one will easily be able to obtain and use one.