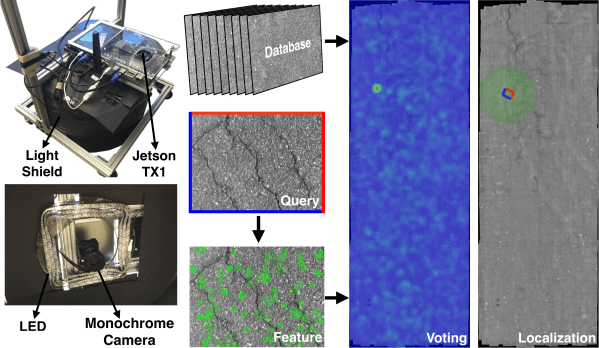 GPS is an incredibly powerful tool that allows devices such as your smartphone to know roughly where they are with an accuracy of around a meter in some cases. However, this is largely too inaccurate for many use cases and that accuracy drops considerably when inside such as warehouse robots that rely on barcodes on the floor. In response, researchers [Linguang Zhang, Adam Finkelstein, Szymon Rusinkiewicz] at Princeton have developed a system they refer to as MicroGPS that uses pictures of the ground to determine its location with sub-centimeter accuracy.

The system has a downward-facing monochrome camera with a light shield to control for exposure. Camera output feeds into an Nvidia Jetson TX1 platform for processing. The idea is actually quite similar to that of an optical mouse as they are often little more than a downward-facing low-resolution camera with some clever processing. Rather than trying to capture relative position like a mouse, the researchers are trying to capture absolute position. Imagine picking up your mouse, dropping it on a different spot on your mousepad, and having the cursor snap to a different part of the screen. To our eyes that are quite far away from the surface, asphalt, tarmac, concrete, and carpet look quite uniform. But to a macro camera, there are cracks, fibers, and imperfections that are distinct and recognizable.

They sample the surface ahead of time, creating a globally consistent map of all the images stitched together. Then while moving around, they extract features and implement a voting method to filter out numerous false positives. The system is robust enough to work even a month after the initial dataset was created on an outside road. They put leaves on the ground to try and fool the system but saw remarkably stable navigation.

Their paper, code, and dataset are all available online. We’re looking forward to fusion systems where it can combine GPS, Wifi triangulation, and MicroGPS to provide a robust and accurate position.

END_OF_DOCUMENT_TOKEN_TO_BE_REPLACED

Outdoor navigation is a problem that can be considered solved for decades or maybe even centuries, depending on the levels of accuracy, speed and accessibility required. Indoor navigation and location, on the other hand, is a relatively new field and we are still figuring it out. Currently there are at least four competing technologies pushed by different manufacturers. One is ultra wide band radio and [Marco van Nieuwenhoven] shows us what a beacon using this technology is made of.

In his thorough tear down of an Estimote location beacon, he comes up with a complete parts list and schematics for each of the four PCB layers. The beacons are controlled by a Cortex M4 and feature Bluetooth radio in addition to the UWB part. They also come with a three-axis accelerometer, temperature, ambient light and pressure sensors and NFC capability. These boards combine a lot of functionality in a compact package and [Marco]’s stated intent is to create an open source firmware for them.

Hacking proprietary hardware, especially when doing so in public may get you in legal trouble, but in this case [Marco] has contacted the manufacturer, and the relationship seems to be friendly so far. Let’s hope it stays that way; these things look like a promising platform and may become a lower cost alternative to the evaluation kit running the same UWB radio we featured earlier. Alternatively you could ditch the UWB and use WiFi for indoor location.

Robots of the future will be in the home, and ready to do whatever job we tell them to do. But they’ll need to know where they are within the house. Dead reckoning with accelerometers and gyroscopes are just a sufficient solution; what we really need is an indoor location service. For his Hackaday Prize entry, [Göran] is doing just that. He’s building a small device that will find its position with 10 cm precision, indoors.

[Göran]’s LPS Mini is built around a very interesting part – the Decawave DWM100. It’s a module that uses an 802.15 radio to trilaterate the distance from several ‘anchors’ to a tag. This, by itself, gives the LPS Mini a navigation system with 10 cm precision. Even higher precision can be accomplished with an IMU gathering accelerometer, gyro, and compass data, and even further with a tiny altimeter. The result is a tiny board that knows exactly where it is.

As far as practical uses go, these LPS Mini boards were used to move beds around an art exhibit at Hayward Gallery in London. While moving beds around an art gallery doesn’t sound like a game-changing invention, think about the uses for GPS in the 1980s – no one could have imagined a chip that would tell you where you are or that could keep a quadcopter on the right heading.

You can check out [Göran]’s video for the LPS Mini below.