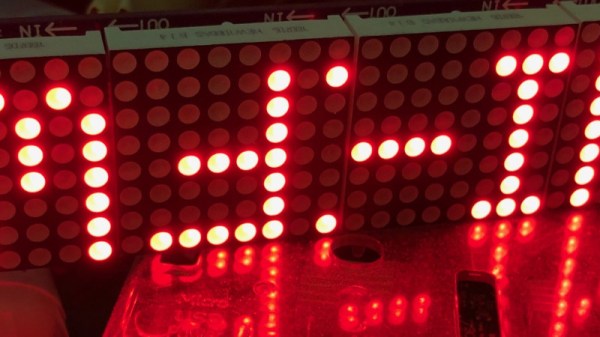 When we recently discussed the skills that we might wish to impart upon a youngster, one of those discussed was the ability to speak more than one language. If any demonstration were required as to why that might be the case, it comes today in [Byfeel]’s Notif’Heure, an ESP8266-powered clock and display (French-language, Google Translate link). If we only watch for English-language projects, we miss much of the picture.

The project began life in April 2018 (Google Translate link) and has since speedily progressed through many software versions to the current v3.2. In hardware terms it’s pretty simple: an ESP8266 development board drives a set of LED matrix displays. In the software though it has the primary function of an NTP-synchronised clock, there is also support for notification display and integration with the Jeedom home automation package.

We’ve featured innumerable ESP8266 clocks over the years, but surprisingly this is the first one with Jeedom integration. With so many to choose from it’s difficult to pick examples to show you, so perhaps it’s time to go to the truly ridiculous with this twelve-ESP monster.