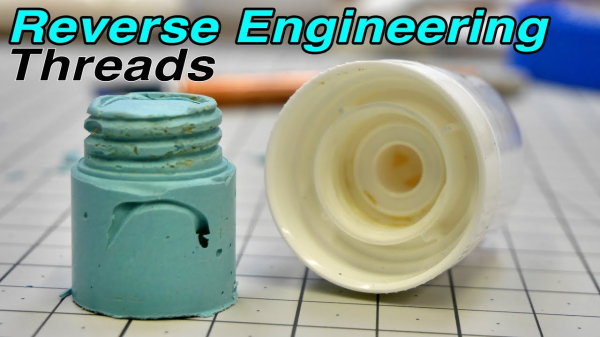 Recently, one of [Eric]’s clients asked him to design a bottle. Simple enough for a product designer, except that the client needed it to thread into a specific type of cap. And no, they don’t know the specs.

But that’s no problem, thought [Eric] as he turned on the exhaust fan and reached for the secret ingredient that would make casting the negative image of the threads a breeze. He mixed up the foul-smelling body filler with the requisite hardener and some lovely cyan toner powder and packed it into the cap with a tongue depressor. Then he capped off the cast by adding a small PVC collar to lengthen the cast so he has something to grab on to when it’s time to take it out.

Bondo does seem like a good choice for casting threads. You need something workable enough to twist out of there without breaking, but rigid enough that the small detail of the threads isn’t lost. For the release agent, [Eric] used Johnson’s Paste Wax. He notes from experience that it works particularly well with Bondo, and even seems to help it cure.

Once the Bondo hardened, [Eric] made sure it screwed in and out of the cap and then moved on to CAD modeling and 3D printing bottle prototypes until he was satisfied. We’ve got the video screwed in after the break to cap things off.

Did you know that you can also use toner powder to tint your epoxy resin? Just remember that it is particulate matter, and take precautions.